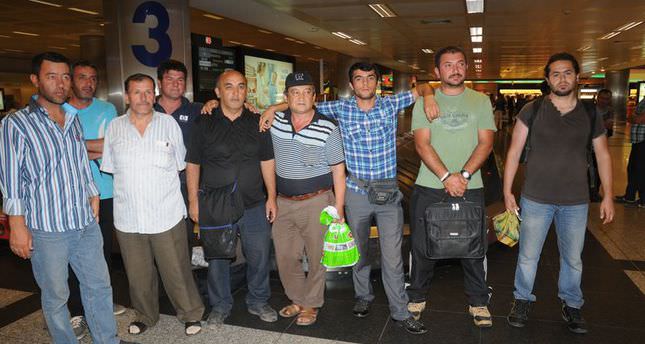 by Daily Sabah Sep 29, 2014 12:00 am
36 Turkish workers, trapped in Libya for days amid armed clashes, arrived in Istanbul late on Monday on a Turkish Airlines plane from Misurata, in north-western Libya.

The 396 Turkish workers, who are mostly employed in the construction industry, were stranded at the Ghat Airport, located in the Fezzan region of Southwestern Libya, for the last five days.

A Turkish Airlines plane arrived in the territory to evacuate the workers upon Turkish FM Mevlüt Çavuşoğlu's instruction. Sources reported that the workers are all in good condition and other stranded workers who are still in Libya will be evacuated as soon as possible.

Libya has been dogged by political instability since the 2011 ouster and death of longstanding ruler Muammar Gaddafi and the violence between rival factions and tribes has increased in recent weeks.