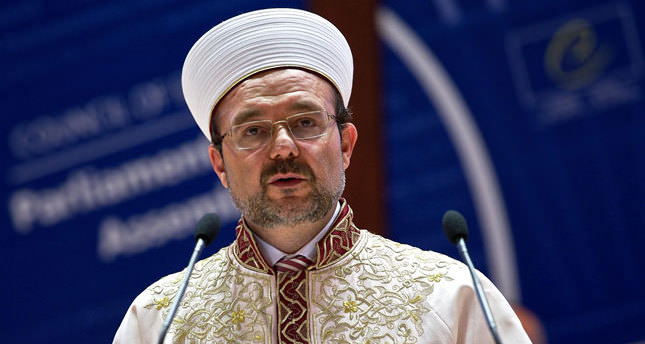 by Daily Sabah Sep 30, 2014 12:00 am
Mehmet Görmez, head of the Turkish Directorate of Religious Affairs (DİB), criticized the "erosion of history" in the holy Muslim city of Mecca, located in Saudi Arabia, where Islam's holiest site, the Kaaba, is located.

Görmez spoke to reporters in Mecca when he visited the city ahead of annual hajj pilgrimage. Recalling a past visit to Mecca, Görmez lambasted the Saudi authorities for constructing skyscrapers that tower over the modest, cube-shaped Kaaba. "It was one of my first visits. [Saudi officials] booked a hotel room for me on the 20th floor [of a hotel overlooking the Kaaba]. I wasn't aware it had a view of Kaaba. I approached the window and saw Kaaba below. My knees [started] shaking and I stormed out of the room. I found another room on the ground floor. Later, I told the Saudi minister in charge of the Hajj that it was wrong to construct buildings overlooking the Kaaba. He told me it was as usual as flying above Mecca and was nothing extraordinary. This is where we differ," he said.

Görmez said that the historic quality of "sacred lands" was disappearing due to "an erosion of history." "We wish that history could be preserved. The Kaaba and places where stages of hajj take place are symbols. If you lose the meaning of those symbols, purpose of the hajj will be lost," he said. Görmez added that he often talked to Saudi authorities about the need to remove the multi-story buildings around the Kaaba, but Saudis told him that the geography of Mecca necessitated the construction of those sites around the Kaaba.

Mecca has seen a construction boom in the recent years, with high-rise buildings surrounding the religious sites. The areas around the Kaaba that attract millions of Muslims every year during Eid al-Adha (the Festival of Sacrifice) are mostly under construction to expand the roads leading to the holy sites. Although Saudi authorities claim renovation and expansion of the historic sites are required to house an ever-increasing number of pilgrims descending into Mecca for hajj, critics say this does not explain posh hotels around the Kaaba that contribute to segregation between rich and poor Muslims that hajj ritual seeks to eradicate by uniting them.

Görmez said some Muslims become selfish when they arrive at the Kaaba. "They pray for themselves alone and forget their brothers and sisters," he said. "The hajj means a spiritual journey for a person to question himself, but we are so occupied with other matters that we forget to take this journey," he said. "The hajj also means a journey to the history [of Islam] and a journey to meet brothers and sisters," he added. Görmez said that recent pilgrimages have seen a "ghettoization" with Muslims from each country only mingling with each other instead of meeting with fellow Muslims from other countries.

He also expressed his discontent with the lack of self-criticism in the Muslim world regarding the emergence of militant groups like the Islamic State of Iraq and al-Sham (ISIS) and Boko Haram. "Muslims always think that these groups exist as a plot by foreign powers to divide them, but they avoid talking about other causes giving rise to those groups. They did not emerge naturally in the Muslim world. There are a number of factors such as the wounded conscience of Muslims due to violence, the colonial approach of foreign powers and ignorance. We have to see how people leading these groups were trained on Islam and revise our approach to educating people on Islam," he said.

"Unfortunately, the existence of Islam in any country is being viewed as a security threat today. A religion that brought peace to the world is branded as a threat to peace. This is not only about ISIS or Boko Haram. We have to consider what caused this," he concluded.