Life expectancy rises in Turkey but still below EU figures 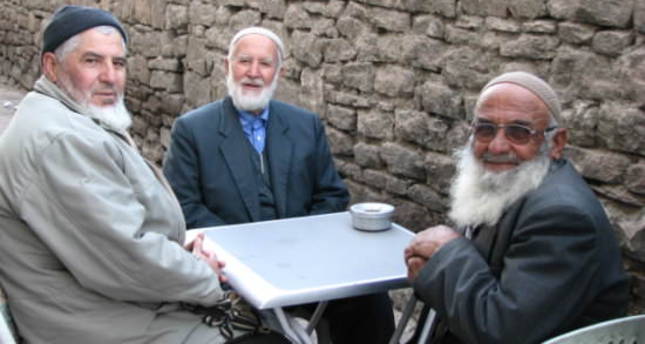 by Daily Sabah Oct 01, 2014 12:00 am
Turkey's state-run statistical authority TurkStat has announced data on the life expectancy in the country for the first time in its history yesterday.

Life expectancy at birth is among the major indicators of the socio-economic status of people, quality of life and mortality ratio in a country.

The rate of life expectancy at birth was 67.4 years in 1990 and rose to 74.1 years in 2011 though specific life expectancy tables at both national and provincial levels were not available in the previous years' data.

Life expectancy rates vary in different regions of Turkey. Giresun, a northern province located on the Black Sea coast, has the highest life expectancy at 78.9 years. It is followed by Rize, another Black Sea province, at 78.7 years. Cities in the Black Sea region, famous for its lush forests, organic farming, year-round rainfall and vast coast running parallel to a largely unspoiled sea, are known as hubs of longevity. Yalova in northwestern Turkey tied Rize. Erzurum in the east of Turkey has the lowest life expectancy rate at 72.1 years.

As for the country's most populated city, Istanbul, and the capital, Ankara, life expectancy rates in those cities are above average compared to other cities, at 77.2 years.

Speaking on the occasion of the International Day of Older Persons, Family and Social Policies Minister Ayşenur İslam said that Turkey's population was rapidly aging, noting that the number of people above 65 made up 7.7 percent of the total population. İslam attributes this figure to a decline in fertility rates and improvements in living conditions. "It will be about 10.2 percent in 2023 according to the forecasts and 21 percent in 2050. But this is a concerning issue for our ministry as we will be vested with tasks we can be proud of. Older people are respected in our religion, culture and civilization," she said.

Mentioning her ministry's efforts to help senior citizens, İslam said they prioritized the care of elderly people at home rather than accommodating them in nursing homes. She cited that families were paid monthly benefits for the care of elderly people with health problems in their families and that over 150,000 senior citizens benefited from this service.

She stated that the number of state-run nursing homes had also increased to 121 from 63 in 12 years, and their facilities were expanded to include therapy centers, legal counsel, etc.

The ministry also established special nursing homes where three or five senior citizens at most will be accommodated, allowing them to socialize more often but enjoy the comforts of home at the same time.

On the other hand, the government has already expressed concern over the rapidly aging population. During his tenure as prime minister, President Recep Tayyip Erdoğan led efforts to curb the trend, including through his much publicized advice to newlyweds to have at least three children.