Traffic a major concern for otherwise joyous eid in Turkey 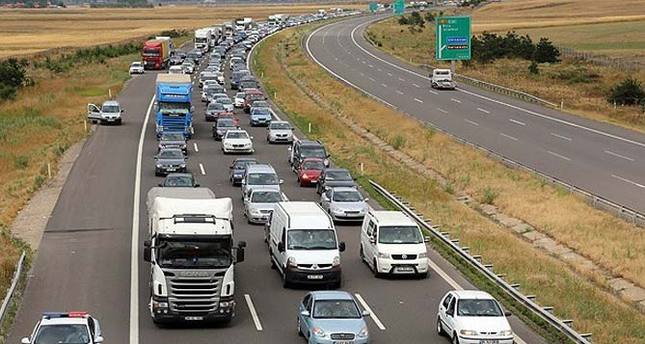 With a five-day holiday kicking off for the Muslim festival of sacrifice, Eid al-Adha, a mass exodus from big cities started, leading to traffic jams on major highways in Turkey

The ordeal of holidaymakers started on Friday, the eve of the four-day Eid al-Adha, as many took to the roads, congesting traffic on major highways.

Istanbul, the country's most populated city, saw perhaps the biggest exodus of motorists and passengers heading to vacation resorts in the south or their hometowns. Friday was a half-day off for businesses, but many people took a full-day leave and hit the road on Thursday night from Istanbul. What followed was hours of waiting amid a long line of vehicles stranded on congested roads. Traffic jams continued well into the late hours of Thursday. Istanbulites woke up to an unusual morning on Friday, with fewer cars on the streets than usual rush-hour traffic.

Istanbul's frustrating traffic was moved to Bolu in northern Turkey where a main highway connecting the city and other cities in the northwest to northern, central and eastern parts of the country is located. A 15-kilometer-long line was formed in front of tollbooths on the TransEuropean Motorway (TEM). Traffic was diverted to other less travelled roads in the area, but long lines continued throughout the day. Part of the road narrowing near the tollbooths led to the snarl. Meanwhile, incoming traffic to Istanbul remained scarce. Frustrated over the traffic jam, some motorists left their vehicles and picnicked on the traffic islands.

The influx of motorists is expected to end by Saturday, the first day of eid. However, it will make a comeback on Tuesday, the last day of the eid holiday, as those returning from hometowns and vacation resorts will flock to Istanbul and other cities.

Authorities took measures against traffic accidents common during eid travel. All members of the Turkish National Police's traffic department will work throughout eid, while police officers from other units were authorized for inspection of cars and motorists. Apart from cars, buses will be subject to increased inspections, especially for those using a type of illegal oil that caused a number of accidents in the past due to its rapid flammability.

Most accidents are caused by reckless drivers exceeding speed limits and overtaking other cars. Traffic police will also check drowsy drivers and remove them from traffic until drivers take a rest.

Another measure is plainclothes policemen who will be deployed in buses to check violations of traffic rules. Policemen will monitor the driver from departure station to arrival station.

To ease the traffic, toll roads will be free from Saturday to 08:00 a.m. on Oct. 8. Police helicopters will also monitor the traffic in six cities: Ankara, Istanbul, İzmir, Adana, Antalya and Diyarbakır.

Police analyzed accidents that occurred the last five years during the eid and determined the areas where accidents are concentrated. Those areas will be monitored every 10 kilometers by traffic police squads deployed throughout each route.

About 16 million people are expected to participate in eid travel this year. According to statistics, an average of 17 people died on each day of Eid al-Adha in traffic accidents in the past nine years. Last year, 131 people were killed in accidents during Eid al-Adha and 6,738 others were injured.

Yet, despite the measures, accidents keep claiming lives. On Friday, eight people were killed when two cars ran into each other near the Akhisar district of the western city of Manisa. Victims were members of two families traveling to other cities for Eid.