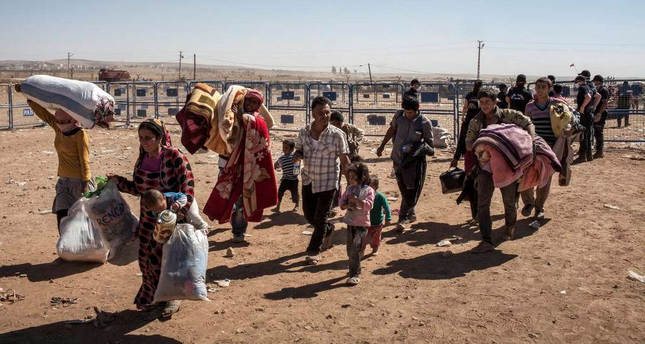 by Daily Sabah Oct 08, 2014 12:00 am
The Turkish Ministry of Health mobilized its staff for displaced Syrian Kurds who have been fleeing Syria's Kobani over the past few weeks and coming into Turkey.

Addressing the needs of the displaced arriving to the Turkish border on foot and exhausted, the ministry set up a field hospital in the Turkish province of Şanlıurfa's Suruç district where the Turkish-Syrian border crossing is located. A large number of ambulances were also dispatched to the area for emergencies.

The ministry vaccines every single new arrival, nearly 40,000 children among the displaced were vaccinated against polio and measles. Doctors and nurses work around the clock for the vaccination of Syrian Kurds arriving from Kobani while medical teams apply triage to the injured amassed on the border. Civilians wounded in clashes between Kurdish militants and ISIS are being transported to Turkish hospitals in the vicinity. The ministry also delivers medicine through mobile teams to nearly 150,000 Syrians who took shelter in Suruç.

Medical teams also take blood samples from each Syrian to test them against possible contagious diseases. So far, no positive cases were found.