ISIS in existence due to Assad regime, says Turkish FM 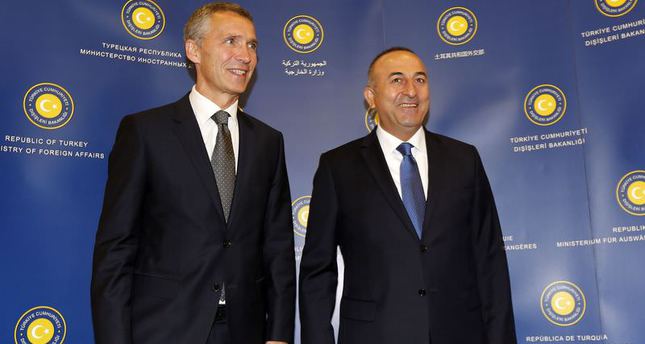 by Daily Sabah Oct 09, 2014 12:00 am
Massacre and tyranny will remain in the region as long as Assad regime continues, said Turkish Foreign Minister, Mevlüt Çavuşoğlu, during the press conference held together with NATO's newly appointed Secretary-General Jens Stoltenberg.

As part of his first group of visits to allied capitals, Stoltenberg held a meeting with the Turkish Minister during which the instability in the region was brought to the table. At the press conference held after the meeting on Thursday, Çavuşoğlu told the reporters, the current extremist groups have come into existence due to the Assad regime and that the free Syrian army should be supported.

Turkey backs the US-led airstrikes on ISIS, however, they are not enough to "clean" the group, Çavuşoğlu said. Although ground operation on ISIS should also be considered, it is not "realistic" to expect such an operation solely from Turkey, the Minister said. A "comprehensive strategy" should be considered against ISIS, according to Çavuşoğlu.

Stoltenberg complimented Turkey on its hosting thousands of refugees and the Turkish parliament on the recent approval of the mandate allowing Turkish troops to conduct operations abroad. In response to a reporter's question asking what the alliance did "concretely" to help Turkey, the NATO leader said, Turkey has the second biggest army among allies and upon the country's own demand two years ago, the alliance has placed two patriot missiles in the country.

He further said, "There is a need for a long-term solution" for stability in the region and NATO countries are willing to support the Iraqi army.