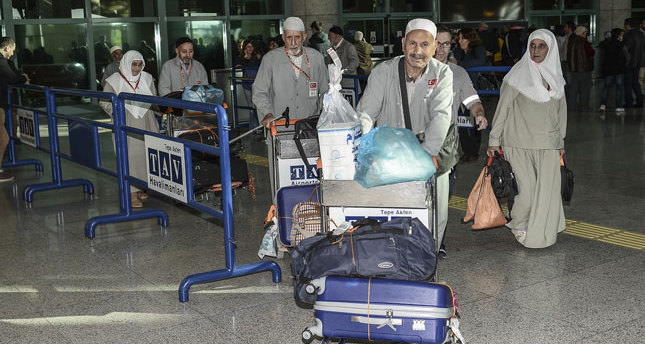 by AA Oct 09, 2014 12:00 am
Upon completing the hajj pilgrimage that marked the beginning of Eid al-Adha (the Muslim festival of sacrifice), Turkish pilgrims began to return home earlier this week.

Dozens of pilgrims from the Turkish capital of Ankara flew to the city from Saudi Arabia yesterday morning where they were welcomed by their families and relatives.

Hüseyin Hisar Güngör, 42, who performed hajj with his wife, said they were pleased to fulfill their religious duty. "It is a difficult duty and you need to do it at a younger age. But it cleanses your soul. When you wear the ihram [the white attire pilgrims wear during the hajj], you feel like you have turned a new, blank page in your life. May God bless all Muslims and have them perform hajj," he said.

Nurhan Şahin, 54, said she missed her family when she left for hajj, but she longed to go back once she returned to Turkey. "I had a hard time leaving the holy lands, home of our Prophet Muhammad," she said.

The hajj is performed in and around Mecca. Every healthy Muslim with financial means is obliged to perform hajj at least once, as the religious duty is one of the five pillars of the Islam.