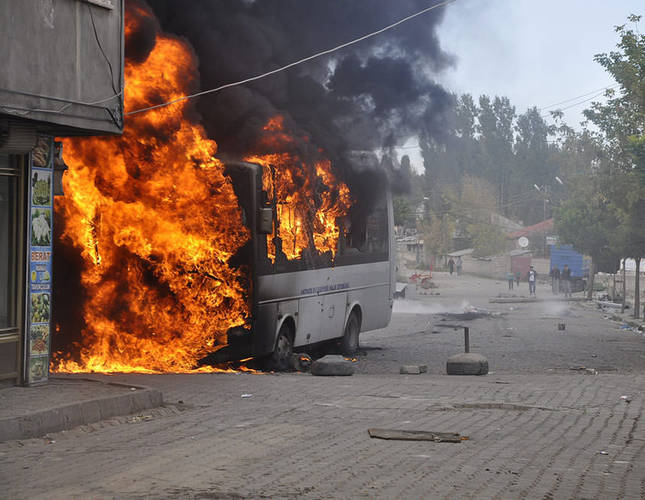 by Daily Sabah Oct 13, 2014 12:00 am
Turkish police captured four members of the terrorist organization PKK in operations in the southeast of Turkey in a clampdown following deadly riots perpetrated by the group across Turkey. The captured militants include two men who were preparing to launch attacks on security forces and two senior militants.

The Diyarbakır branch of the Turkish National Police started an operation acting on intelligence that the PKK would carry out attacks against security forces, offices of government agencies in Diyarbakır and against alleged members of the Islamic State of Iraq and al-Sham (ISIS).

Sinan Ç. and Caner Ş., two PKK militants were stopped as they were about to carry out an attack on a police station in Diyarbakır's Bağlar district on Oct. 9. Militants engaged in a clash with the police and were captured injured. Searching the car, policemen found three AK-47 rifles, two pistols, a large cache of ammunition and five grenades. The police also found a piece of paper on which three license plates were written in possession of militants. The license plates belonged to cars used by three Diyarbakır residents described as ISIS militants. Twitter accounts linked to PKK sympathizers tweeted that its supporters should target those cars. PKK supporters had engaged in clashes with members of the Free Cause Party (HÜDA-PAR), an opposition party that the terrorist organization claims of having links with ISIS. PKK supporters have engaged in clashes with police and HÜDA-PAR members, affiliates of that party throughout the week. Thirty-four people were killed in riots that originally started out as a protest over the government's "inaction" over the ISIS assault on Kobani, a Syrian Kurdish town near the Syrian-Turkish border. Twelve casualties were reported in Diyarbakır during the riots and 45 people were arrested. Fourteen policemen were injured in the riots.

Launching a crackdown on elements of the PKK in Diyarbakır, where the terrorist organization draws its support from is predominantly Kurdish population, the police found out two senior PKK militants were in the region. One of the militants going by nom-de-guerre Sofi, was found at a hospital in Diyarbakır's neighboring province Şanlıurfa. He was being treated at a hospital after he entered Turkey from Syria with a fake ID. Sofi was reportedly injured in clashes with ISIS in Kobani. Turkish police also captured Selman A., another senior PKK member who was accused of plotting attacks against the police and masterminding deadly riots.