4 soldiers killed in helicopter crash in the northwest 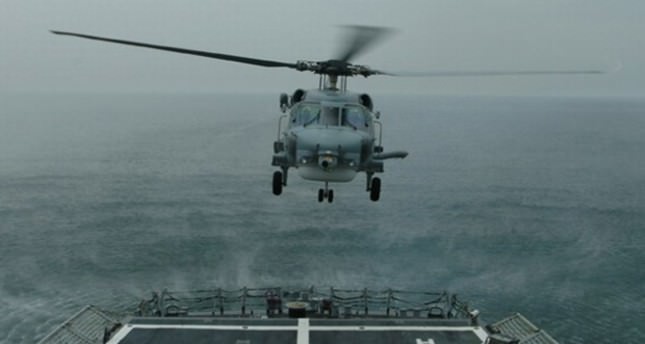 by Daily Sabah Oct 14, 2014 12:00 am
A S-70B Sikorsy military helicopter crashed in the northwestern Turkish province of Kocaeli on Sunday, killing four military officers aboard.

The helicopter was heading to the central Turkish province of Konya for a five-day training mission when it disappeared from the radar screen, some seven minutes after it took off from a Turkish Naval Forces airport in Kocaeli at noon on Sunday.

Its wreckage was found in a mountainous region in Kocaeli's Kartepe district some nine hours after it went missing. The wreckage was at the bottom of a 500-meter high cliff. Maj. Deniz Akdeniz, First Lieutenant Çağrı Ceyhan, non-commissioned officers Ömer Burak Öğüt and Mehmet Karakaşoğlu were killed in the crash. Their bodies were recovered from the wreckage early Monday.

In a statement on its website, the Turkish Armed Forces said the helicopter was found in a rural area near a village of Kartepe. The statement said an investigation was launched into the cause of the crash.

It is the deadliest helicopter crash in Turkey since 2013. In December 2013, four soldiers were killed when their helicopter crashed near the Gölbaşı district of the capital Ankara.