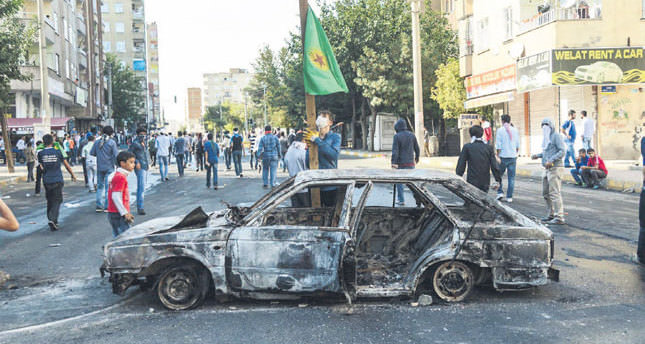 by AA Oct 16, 2014 12:00 am
The remains of Yasin Börü, 16, Hasan Gökgöz, 26, and Hüseyin Dakak, 19, who were all killed on the second day of the Muslim festival of sacrifice, Eid al-Adha, as they distributed food aid to Syrian refugees along with a friend, Yusuf Er, were found after they were attacked by supporters of the PKK, claiming their victims supported the Islamic State of Iraq and al-Sham (ISIS), police officials said.

Börü's parents told Anadolu Agency (AA) yesterday that they could hardly recognize their son's body as it had been so badly butchered. His mother, Hatice, said she could only identify her son from a mole on his foot and by the shirt he was wearing. She said, "A group tried to sandwich the four of them in a street, but they fled and took shelter in an apartment. However, people in the flat informed the attackers, saying 'the pro-ISIS people' were there, and the homeowner opened the door to the attackers."

Yusuf is believed to have escaped around this time. "The three said they were not pro-ISIS, but could not convince the group. The assailants shot the three friends and then threw them from the third floor, but not content with that, they then burned, beat and slashed the bodies," she said.

"I wish I could have taught him how to defend himself in a fight. He did not even throw a stone at anyone in his lifetime. If I knew things could get as bad as they are, I would have had him learn martial arts or something else for self-defense," she said.

His father, Fikri, said, "Even a wolf would not chop a sheep like that. The attackers were using Kobani as a pretext - their real aim was to create chaos in Turkey. They wanted to turn Turkey into Kobani."

Hüseyin Dakak, the father of 19-year-old Hüseyin, said his son was targeted because of his Islamic clothing. "There were about 50 knife wounds in his back. They had attempted to burn his body and they ran over it with a car," he said.

"Eyewitnesses said that, while the mutilation was ongoing, some bystanders were shouting, 'Burn them!' from their balconies. People who say things like that - do they not have any children?" Dakak asked.

Before the protests erupted last Thursday and Friday, the Peoples' Democratic Party (HDP) had called on their supporters to take to the streets in support of Kobani, which is currently besieged by ISIS militants.

The violence left 34 people dead across Turkey - 12 of them in Diyarbakır. Most of the casualties were sustained in clashes between supporters of the PKK and the supporters of the Free Cause Party (Hüda-Par) that the PKK accuses of having ties with ISIS.

Selahattin Demirtaş, the co-chair of the HDP, said he was behind the call for protests but said he never called for violence.

Mehtap Gökgöz, the mother of Hasan, who left a two-year-old child and a pregnant wife behind, said, "I will sue Selahattin Demirtaş. Their problem was not with ISIS, but [with] us. Hasan's teeth were broken and his body was riddled with holes. I could only recognize him from his beard."

Explaining that her son was distributing meat to people fleeing the ISIS attacks in Kobani and to Yazidis fleeing from Iraq, she said, "The PKK, HDP and DBP [Democratic Regions Party] do not like such service [...] they attacked them, accusing them of being pro-ISIS."

Hasan's father, Mehmet, said his son almost sensed his death. "He was concerned when [pro-PKK groups] took to the streets. He told me, 'It looks like we will be[come] martyrs,'" Mehmet said. "He was helping those from Kobani and Yazidis from Iraq. [Pro-PKK groups] knew he was involved in charity work for refugees. That's why they hated him," he added.

Mehmet said he personally came under attack while going to the mosque and was injured. "I spoke to Hasan on the phone and told him we were attacked. I could hear a commotion in the background as we were speaking. Then, we lost contact. I felt at that moment that my son was martyred," he said.

Last month, ISIS militants launched a full-scale attack on the Syrian Kurdish border town of Kobani, also known as Ayn al-Arab, which is under control of armed units from the Democratic Union Party (PYD).

Rioters claim that Ankara has done nothing to halt the advance of ISIS in Kobani, just across the Turkish border.

Turkish officials have said they have already aided nearly 200,000 people fleeing Kobani and have called for a U.N. safe zone in Syria for refugees.

The PKK is listed as a terrorist organization by Turkey as well as the U.S. and EU. Street violence by pro-PKK groups triggered concerns among Muslims especially in southeastern Turkey where the terrorist organization draws support as the PKK stepped up attacks against conservative Kurds, indiscriminately branding Muslims opposing it as "pro-ISIS."