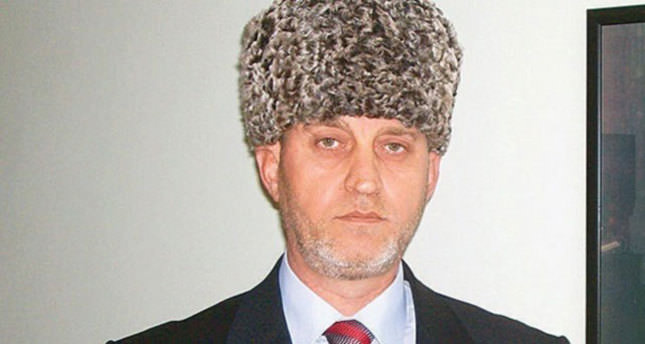 by Aliye Çetinkaya Oct 16, 2014 12:00 am
Prime suspect in 2013 murder of a prominent Chechen businessman and activist in Ankara told police he was hired by a Russian national to carry out the killing

Murat Aluç, main suspect in the killing of Medet Ünlü in the Turkish capital of Ankara, told police in his first interrogation since his capture that he was paid to carry out a hit on Ünlü by Rizvan Ezbulatov, a Russian national.

He said he made a deal with Ezbulatov, who was a frequent visitor to Turkey, to kill Ünlü for $40.000 and TL 20.000. Turkish prosecutors issued an international arrest warrant for the detention of Ezbulatov who reportedly hides out in Ukraine.

Aluç and five others were captured by police in the northwestern Turkish province of Kocaeli earlier this week after he eluded capture for about one year. A Turkish court ordered his arrest along with three other suspects.

In a nine-hour interrogation, Aluç was asked whether he had connection to Russian intelligence services. Aluç said he committed the murder for money. "(Those hiring me) said that Ünlü embezzled money from Chechens and wanted him dead. I met with Rizvan Ezbulatov and together, we planned the murder. They paid me $40.000 and TL 20.000 up front and would pay me as much after the killing," Aluç told police and prosecutors. He added that he was planning to flee abroad when the police captured him.

Ünlü's family had claimed that Ezbulatov masterminded the plot to kill the Chechen activist. Prosecutors had already issued a red notice for Ezbulatov.

Turkish media reported that Ünlü was target of a pro-Russian Chechen faction because of his reported aid to Chechen groups opposing the Ramzan Kadyrov regime of Chechnya. The media reports also claim Ezbulatov and Aluç, posing as businessmen, met Ünlü before his murder and persuaded him to a joint investment. Reports say Ezbulatov, by establishing business relations with Ünlü, was planning to get closer to other Chechen activists in order to assassinate them.

Murat Aluç, 47, and Ömer Peltek, 24, who was accused of helping Aluç in the murder, were captured after eight months of surveillance.

Both suspects had frequently changed their hideouts during the police pursuit. Raiding the houses and workplaces of people helping the suspects to hide, police found guns, jammers, passports and documents "in a Cyrillic language."

Medet Ünlü was killed in his office in Ankara on May 23, 2013, by suspects who shot him in the neck. An ethnic Chechen born in Turkey, he was honorary consul for the unrecognized Chechen Republic of Ichkeria in Turkey that opposes the current administration in Chechnya and advocates a new independent state. Members of the dissident Chechen community in Turkey had protested Russia over the killing, claiming Russia was beyond the killing.

Six Chechen dissidents were killed in Turkey between 2008 and 2011 in murders blamed on Russian intelligence. The first in the wave of murders targeting Chechens residing in Istanbul was in 2008 in the city's Başakşehir district. Gazhi Edilsultanov, who worked for a charity to help poor Chechens in Turkey, was shot dead. This was followed by the murder of Islam Canibekov, another Chechen living in Istanbul with his family. A more high-profile murder occurred in 2009. Ali Osaev, a prominent Chechen activist for the Caucasus Emirate, a militant group designated as a terrorist organization by Russia, was killed that year. Bergkhazh Musaev replaced him as representative of the militant group in Turkey, but Musaev and his friends Rustem Altemirov and Zavrbek Amirev were killed in broad daylight in 2011 in Istanbul.

Temur Makhauri, a Georgian national, is the sole suspect in the murders of Musaev, Altemirov, Amirev and Osaev. He remains in detention in Turkey as his trial continues.