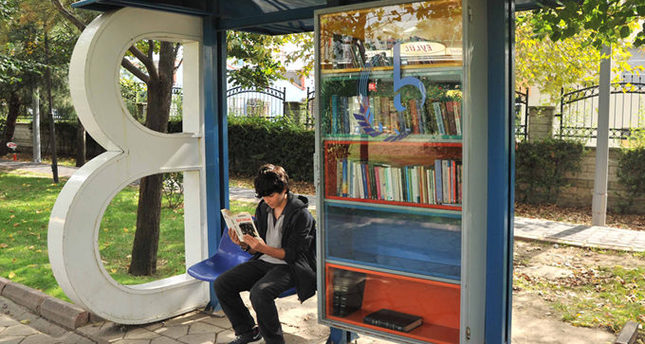 by Daily Sabah Oct 17, 2014 12:00 am
The Municipality of Bağcılar, Istanbul's most populated district, is offering a novel service for commuters: bus stop libraries. Bookcases placed in bus stops will have a wide selection of books for those looking to spend their leisure time while waiting for the bus.

Initially set up in 11 bus stops, the municipality plans to install libraries in others soon. A total of 20,000 books were placed in small libraries since September when they were first introduced and they are being changed with new titles twice a week.

Commuters can either read the books at the seated bus stop or borrow it and read it somewhere else. They can return the books to another bookcase at another bus stop.

Speaking to A Haber, Bağcılar deputy mayor Mehmet Şirin said Istanbul's congested traffic made waiting times for buses longer and people sought things to do to kill time. "People always find excuses not to read books and the first excuse is usually that they don't have free time. This library is an answer to this excuse," he said. Şirin said that they were pleased with the positive feedback for the libraries. He said that bookcases in bus stop libraries are never left empty and they replaced the borrowed books with new ones every day.

Şirin said that adults, young adults and children can find a title to their taste in the libraries. "Our municipality has a library and we chose titles for the bus stop library among titles in demand in the municipality library.

Though the libraries are managed by the municipality, it is clearly inspired by a similar project in Israel's Haifa. A group of artists had installed bookcases in bus stops there in 2010. Libraries were quickly embraced by commuters who started donating books themselves.