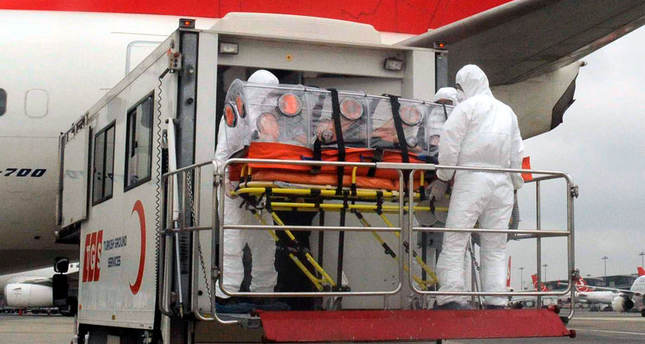 by Daily Sabah Oct 17, 2014 12:00 am
A transit passenger who was transferred from Istanbul's Atatürk Airport to Bakırköy Dr. Sadi Konuk Hospital died Friday with the suspicion of Ebola virus.

It was reported by the Turkish daily Habertürk that an Indonesian woman was travelling from Saudi Arabia after her Hajj pilgrimage to Indonesia, and the woman's corpse was quarantined at the Forensic Medicine Institution and blood samples were sent abroad for examination.

However, Turkey's Anadolu Agency later reported sourcing the Borders and Coasts Health General Directorate that the passenger was of Nigerian origin and was travelling to Nigeria after Hajj, and died due to chronic diabetes and heart failure.

Indonesian consulate sources have also stated that the passenger was of Nigerian origin.