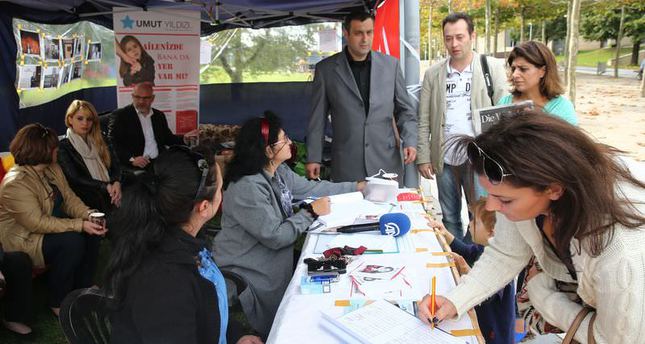 by AA Oct 20, 2014 12:00 am
A Turkish nongovernmental organization is spearheading a protest in Germany's Düsseldorf against the adoption of Turkish children by German families.

Activists from the Umut Yıldızı (Star of Hope) Association and Turkish citizens in Germany joined the sit-in strike outside Landtag, the representative assembly of North Rhine-Westphalia. They are voicing their concerns about a practice the Jugendamt (Youth Office) allegedly engages in, where they settle children from troublesome or unstable families with German foster parents even in the case of "baseless" complaints towards the biological family of the child.

Speaking on the 25th day of the protest, Kamil Altay, director of Umut Yıldızı, said thousands of children were removed from their families every year and "raised in a lifestyle foreign to their own values."

He said they filed petitions to 16 federal state assemblies and the German parliament on the issue and only 11 of them replied that their petition would be assessed. In response, Altay said it was "welcoming" to receive such a response.

Altay said Jugendamt officials registered children from Turkish families as German citizens in their database and placed those children with German families. "They are not accommodated with their relatives. They are not allowed to speak Turkish," he claimed. He said that his association assists families with the legal process to take back the children and offer psychological assistance to children.

Under a law implemented in 2012, putting children up for adoption was facilitated by making the slightest problem, such as a brawl at school or complaint about a family by a therapist the child was made to visit, a reason enough to remove them from their biological parents, according to Altay.

"First and foremost, we want this practice of removing children from their families in cases of baseless allegations, to be changed. There are 600 Jugendamts across Germany and every office has a different view regarding when to remove a child from his or her family. We want a nationwide standard to prevent differing views of different agencies," he said.

Altay says 600,000 children were placed under protective custody since 1995 and they have no concrete figure about how many of them are Turkish children. "They are recorded as German nationals even if they are from Turkish families with no mention of their ethnic background. This seriously disturbs us because they do not care about the culture and values of Turks," he said.

He claimed that their protest received broad support from Germans. "German citizens have problems too on haphazard removal of children from their families. For instance, Sabine, whose child was taken from her, joined our protest here," he said.
Though no concrete figure is available regarding the number, Turkish activists say about 5,000 Turkish children have been removed from their biological parents and placed in German foster homes, much to the chagrin of families who claim their children are then raised as Christians. The Turkish government is stepping up efforts to restrict this number as it plans to encourage Turkish families living abroad to adopt Turkish children to preserve their cultural identity.

Turkey's Family and Social Policies Ministry is attempting to popularize the concept of foster families among Turkish families living in Europe in order to reduce the number of Turkish children adopted by non-Turkish or non-Muslim families.

Preserving the cultural and religious identity of the Turkish community abroad is what underlies Turkey's struggle to keep children with Turkish families. The government mobilized diplomatic efforts last year after the story of 9-year-old Yunus made headlines. The Turkish boy was adopted by a lesbian couple in the Netherlands, causing public outcry in Turkey.