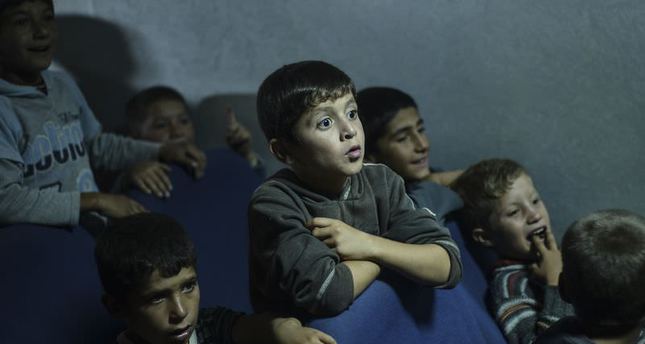 by AA Oct 21, 2014 12:00 am
A cinema was recently established at an accommodation center for displaced Syrians in the town of Suruç. Screening cartoons and films in Kurdish, the cinema offers a break for Syrian Kurdish children who fled to Turkey with their families from the grim reality of war in Syria.

The governorate of Şanlıurfa, where Suruç is located, and a local charity cooperated for the project. A bus installed with a film screen and projector was parked at the courtyard of a school temporarily used to accommodate Syrian Kurds from Kobani.

Films and cartoons are screened between 9:00 a.m. and 4:00 p.m. for children. The bus has a capacity to seat up to 300 children and it is almost always full when a film is screened. Yaşar Dağ, an official from the local charity, says they decided to introduce the mobile cinema project, which had already been launched for children in remote villages, for Syrian Kurdish children. "We aim to help them recover from traumatic events they suffered from and have them socialize with each other. A great many among them never set foot in a cinema before. They watched films for the first time and loved it," he said.