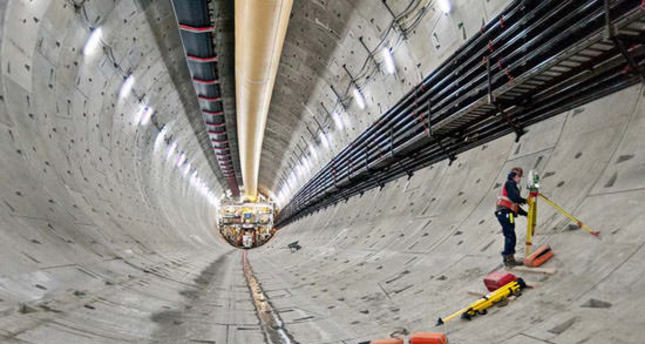 by Daily Sabah Oct 21, 2014 12:00 am
The construction of the Eurasia Tunnel, whose foundation was laid in February 2011, continues with 14 kilometers of track being laid - 5.6 kilometers of which will be built under water - to connect Asia and Europe. The Eurasia Submerged Tube Tunnel Project will be in service via the Göztepe-Kazlıçeşme route which is known for its intense traffic however, officials stated that important historical discoveries might take place during the construction similar to the Marmaray project. Archaeologists are on alert as thetunnel digger machine will begin outcropping near the Boukoleon Palace belonging to the Byzantine period. "Empire Pier" was also discovered during the diggings near the palace as Boukoleon was a prominent coastal palace at that time. Archeologist will be present during the diggings which will proceed slowly as discovered findings must be well-preserved. Apart from the tunnel project, a road enlargement and revision works are currently taking place on both sides of Istanbul. As part of these works, the road between Kazlıçeşme and Çatladıkapı is currently under construction.