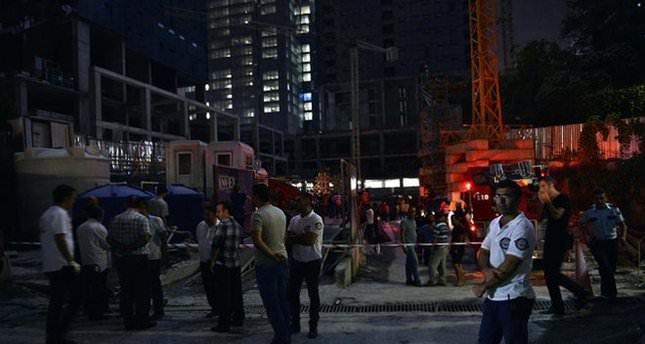 The prosecutor’s office is pressing involuntary manslaughter charges against 25 suspects after September’s deadly elevator accident in Istanbul, seeking prison terms of up to 15 years

The investigation regarding the accident on Sept. 6 that killed 10 workers at a construction site in Istanbul's Mecidiyeköy district has been wrapped up with more than two dozen facing charges of manslaughter. The prosecutor asked the court to hand down prison terms of between two and 15 years for 25 suspects for causing the deaths of 10 victims, charging them with involuntary manslaughter.

Four suspects were arrested while 21 others were released pending trial in the investigation.

The prosecutor also presented a report to the court drafted by seven experts probing the accident that blamed the construction company for negligence.

The report says experts could not determine who was the employee in charge of elevator safety at the time of the accident and noted that only three people were in charge of the elevator while 16 personnel were required to be assigned under work safety regulations. Experts say that the company also could not provide any documentation proving that the workers were trained in work safety.

As for the main cause of the accident, the report blames a "final limit switch," a device limiting the speed of the elevator in the case of an accident. The switch was not working at the time of the accident and why it wasn't working is "not known," according to the report.

Four suspects, who remain in custody, are employees of the elevator company and the foreman of construction site. The company that provided the faulty elevator and its maintenance and the construction company have blamed each other for negligence following the accident.

The family of Murat Usta, one of the 10 workers who were killed on Sept. 6, have filed a lawsuit against the construction company.

The plaintiffs are demanding a compensation package of TL 820,000 ($359,000) from the construction company and its subcontractor for which the deceased worker was working.

Though Turkey has regulations in place to ensure work safety, accidents still reguarly claim lives. Officials say regulations are "more clear" than in the International Labor Organization (ILO) agreement, which critics have called on Turkey to implement, and they are meticulous in risk assessment and inspection regarding dangerous sectors such as construction and mining.