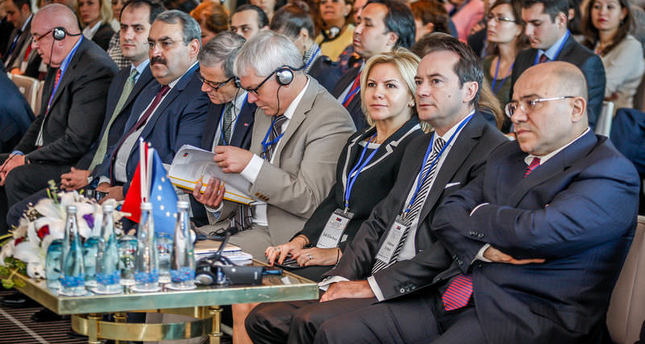 European Bank for Reconstruction and Development (EBRD), European Union, and Republic of Turkey provide €338 million for female entrepreneurs in Turkey


ISTANBUL — The European Bank for Reconstruction and Development (EBRD), in partnership with the EU and Turkey, will provide 338 million euros (TL 962 million) to women-led companies in Turkey within the framework of a new program, Finance and Advice for Women in Business, launched in Istanbul on Wednesday.

The program aims to finance 15,000 women-led enterprises across Turkey, while also offering various training and educational services to help women run their companies. On the occasion of the event, Labor and Social Security Deputy Minister, Halil Etyemez, said, "We aim to create 21,000 new employment opportunities for women via the advantageous credit lines and advisory services provided by this program."

The EBRD, an international financial institution that fosters entrepreneurship in 29 countries, will facilitate 300 million euros of the funding, while the rest will be provided by the EU, the Turkish Ministry of Labor and Social Security and the Turkish Employment Agency (İŞKUR) in grant-based assistance.

Only 18 percent of women entrepreneurs in Turkey claim to use commercial banks for loans, while the others utilize family finances and their savings, said EBRD Country Director for Turkey, Michael Davey, emphasizing the cultural and social restraints for women to access finance as well as the importance of eliminating the gender gap.


In 2012, the employment rate of women in Turkey was only 29.5 percent, according to the Organization for Economic Co-operation and Development's (OECD) 2014 Economic Survey, and this figure decreases even further when it comes to women entrepreneurs.

Etyemez said the Turkish government considers it essential that female employment in the country increase to at least 40 percent by the year 2023 in line with its National Employment Strategy 2014-2023, adding, "As long as women do not bring dynamism to the labor market, it will be very difficult for Turkey to be among the top 10 economies in the world."

This is not the first time the EBRD has financed women entrepreneurs in Turkey. The bank has previously dedicated credit lines of 135 million euros that were specific for women-led companies, but this new project is first of its kind in terms of it also providing "advisory services" for the companies such as "training, mentoring, networking and coaching," along with more advantageous loans, said EBRD Director for Small Business Support, Charlotte Ruhe.

The EBRD -- owned by 64 countries, the European Union and the European Investment Bank -- began its operations in Turkey in 2009, so far committing close to €4 billion in 124 projects covering energy, infrastructure, agribusiness, manufacturing and services, property and tourism, telecommunications, and the financial sector.