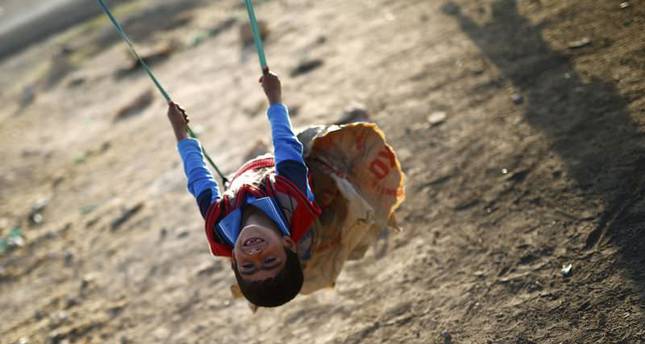 The Turkish public, while hospitable toward the 1.5 million Syrians living in the country, are concerned about the impact refugees are having on the economy, according to a new survey by Hacettepe University

A recent survey published by the Migration and Politics Research Center at Ankara-based Hacettepe University claims that members of the public accept the influx of Syrian refugees but have concerns about the economic impact of mass immigration.

The survey was conducted among 1,501 people, touching on social acceptance towards displaced Syrians living in Turkey and their integration into society. The survey's results point to a high acceptance rate for Syrians with most people opposing the idea of sending them back to their countries.

The public's attitude toward Syrians was questioned after unrest against Syrians gripped several cities where large numbers of Syrians live. Despite low crime rates among the Syrian population, some groups took to the streets in Kahramanmaraş, Gaziantep and Mardin after isolated criminal incidents involving Syrians, venting their fury by beating them and vandalizing their homes.

Contrary to public reports, the survey, that looked into the public mood in the aftermath of the riots, found that Turks, on the whole, have embraced Syrians, calling them their "brothers and sisters." Over 64 percent of interviewees see helping Syrians "regardless of their religion or ethnicity" as "a humanitarian duty." On a question whether Syrians should be sent back to their country, 30 percent responded in the affirmative, while the majority opposed it. The majority of interviewees defined Syrians as "people fleeing from oppression," "our guests" and "fellow followers of Islam." However, researchers warn that the risk remains about a change in this hospitable attitude as long as Syrians' economic burden on Turkey continues. This is evident in the survey results that show over 70 percent of interviewees believe displaced Syrians hurt the Turkish economy. More than half the interviewees also "believe that Syrians increasingly take their jobs" as they are viewed as a lucrative source of cheap labor by businesses. It is particularly concerning for people living in the provinces near the Turkish-Syrian border.

An interesting finding of the survey was that only 30 percent of interviewees said they actively helped Syrians, either by donating to a charity or aiding Syrians directly while the rest have not helped them at all.

As for Syrians interviewed in the survey, it was found that the most troubling aspect of living in Turkey is access to education for Syrians due to a lack of opportunities for education in their own language. Another problem they faced is the lack of work permits. The Turkish government has recently announced that they would be issuing temporary work permits, but many Syrians have already turned to illegal labor after competing with the Turkish workforce.

Turks interviewed for the survey overwhelmingly objected to the issuing of Turkish citizenship to Syrians while all Syrians interviewed said they would be glad if they were issued citizenship.

As for their reluctance to be registered in Turkey, Syrians cited security reasons. "They do not want to be registered as they fear they would be branded as members of the Syrian opposition," the researchers said. Although Turkey is one of the few safe havens in the region for Syrians, they are still afraid of being the target of the formidable Syrian intelligence service that is still loyal to the Assad regime.

The latest figures show Turkey hosts 1,565,000 Syrians with about 1.4 million living outside camps set up by the state in the border provinces, raising concerns about their integration. Syrians live in 72 of the 81 provinces across the country, in houses they rented or bought and in abandoned buildings, parks et cetera. According to the survey, only 57 percent of Syrians are registered while over 600,000 remain unregistered, making it difficult to track them down for humanitarian aid and security purposes. The Turkish government is aiming to have all of them registered and to be provided with better living conditions, either in tent camps or in their private residences.