‘Yellow powder’ alarms at 4 consulates including US in Istanbul 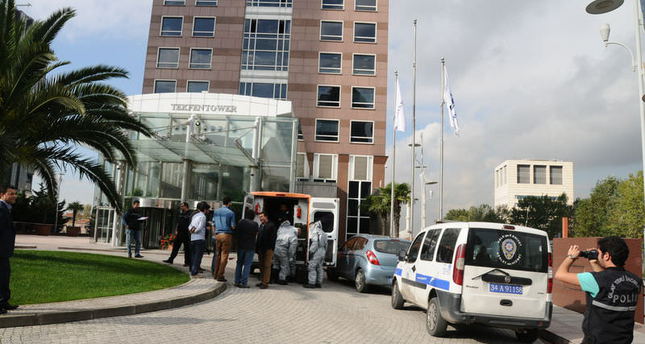 by Compiled from Wire Services Oct 24, 2014 12:00 am
Suspicious packages containing a yellow powder were sent to the Consulates of Germany, Canada and Belgium in Istanbul on Friday, prompting partial evacuations.

The first letter was reportedly sent to the Canadian Consulate. Consulates located in downtown Istanbul were reportedly evacuated while security forces sealed off the buildings. However, a Belgian consular official told Anadolu Agency that the consulate was not evacuated. Yet other media outlets claimed personnel in all three consulates received an e-mail instructing them to evacuate. Turkish media reported that the German Consulate cancelled all events on Friday as a security measure.

U.S. consulate said on its Twitter feed that they received an envelope containing a suspicious powder, adding "it was handled with established protocols and authorities are investigating." U.S. officials said the consulate was operating normally after the incident.

The Turkish Prime Ministry's Disaster and Emergency Management Authority (AFAD) dispatched a team of experts specialized in chemical and radioactive threats to the Canadian Consulate. The package in the consulate was sent to a laboratory to determine whether the composition of yellow powder was toxic.

In a statement, AFAD officials said the air conditioning system in the building was immediately shut down and people exposed to the package were kept in the room as a precaution. One person reportedly had come directly in contact with the yellow powder. The person was transported to a hospital along with six others who had indirect exposure to the powder as a precaution while their clothing is being examined for possible contamination.

Other consulates stepped up security measures following the incident. The French Consulate instructed its staff not to touch any envelope or package sent to the consulate and separate boxing for suspicious-looking packages. The British Consulate imposed an additional security protocol for packages sent there.

Security forces launched an investigation into the incident and there was no immediate claim of responsibility. Two main terrorist organizations operate in Turkey but none have targeted foreign missions of Germany, Canada and Belgium.

Only the U.S. embassy in Ankara and British Consulate in Istanbul have been the targets of terrorist attacks in recent years – the former by a local terrorist organization and the latter by al-Qaida affiliates. Germany's foreign mission in Greece was the target of parcel bombs four years ago along with other foreign missions.

It also comes at a time when Western countries are looking for additional measures against the Islamic State of Iraq and al-Sham (ISIS), which threatens the West and the Middle East. Canada, for its part, was on alert after two attacks killed two soldiers earlier this week.