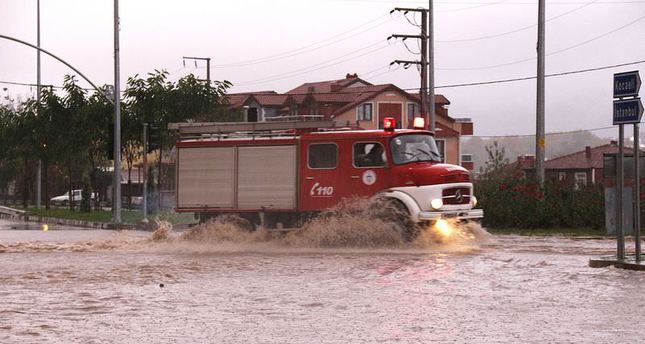 by Daily Sabah Oct 27, 2014 12:00 am
The heavy rains of the past two days have caused floods in the northwest of the country, briefly shutting down the E-5 highway, a major traffic artery connecting the two largest cities of the country, Istanbul and Ankara. The highway was shut down for six hours at the Kartepe-Kocaeli section due to nearby rivers bursting their banks. Dozens of cars were stranded on the highway with passengers being rescued by emergency services. Kocaeli Mayor İbrahim Karaosmanoğlu said strong winds had toppled trees and blocked the waterholes of the highway, which caused the flooding, and that municipal services had removed the blockage.

In Istanbul, ferries carrying commuters across the Bosporus Strait were suspended yesterday due to the strong winds. The Meteorological Institute said yesterday that rain would affect much of the country, with flood danger in the northwest continuing for the next few days.