Mining company might be at fault in Ermenek accident 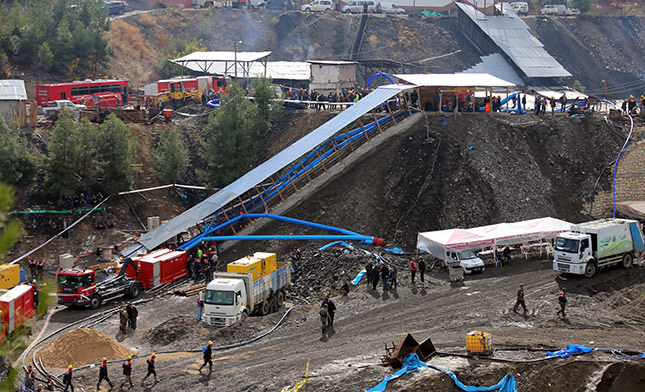 As efforts continue to recover the 18 miners trapped in a flooded mine in the town of Ermenek, remarks from miners and a minister point to the mining company’s negligence

Hopes are dimming as two days passed since the 18 miners became stranded in a mine flooded with tons of water in Ermenek, a small town in the central Turkish province of Karaman. The accident put the work safety in mines issue back under the spotlight. Statements by miners and officials highlight the mining company's shortcomings in terms of safety.

Search and rescue efforts are underway but are mostly hampered by water inundating galleries up to 300 meters below the surface. The government mobilized all resources to remove the water and locate the miners, but officials said that hope has almost faded away for bringing the miners back alive.

Three government ministers – Taner Yıldız, Lütfi Elvan and Faruk Çelik – have been coordinating the efforts to retrieve the miners since the accident occurred at noon on Tuesday. The ministers are regularly updating journalists about the situation.

Speaking to reporters yesterday, Energy and Natural Resources Minister Taner Yıldız said the operation to syphon out the water was continuing smoothly but the sludge and pieces of waste that crashed down onto the pits of the mine due to the flooding hindered the efforts. "We managed to drain the water some 16 meters below, but minor collapses occurred in some areas," Yıldız said. He denied that collapses led them to stop the draining operation.

"Time is running out. I must say that our hopes are declining for our 18 brothers," he said, referring to the trapped miners. Yıldız assured the public that efforts were continuing without cease and about 30 government agencies and organizations were taking part in the operations. He said they had all the needs to evacuate the water and recover the miners in place.

Again, he left unanswered the questions about when the earliest the miners could be rescued. "In every meter of water we drain, we face obstacles. We have to repair areas damaged by water to facilitate the advance of crews, and it takes time," he said.

Though everyone is keeping their spirits high about the fate of the miners, experts say their chance of survival is slimming every minute and they would not be able to make it alive unless they managed to reach a gallery not affected by the flood in time. Sixteen workers had managed to flee from the mine as the water started flooding the galleries.

Yıldız also spoke about the mining company and said, "We are not pleased with their operations," though he did not elaborate. He echoed the prime minister and president's earlier remarks and said anyone at fault for compromising the safety of the miners would face proper punishment. "We will show no mercy to anyone responsible for this, be it company officials or anyone else," he said.

On Wednesday, Turkish daily Vatan published a phone interview with Labor and Social Security Minister Faruk Çelik regarding the allegations of negligence at the mine. Çelik said in the interview that the initial investigation showed accumulated water from an unused gallery blasted into the mine, adding that this "might not be an accident." He implied that the mining company should have taken measures to prevent a flooding from unused galleries. Çelik said that the mine should not have been issued a license. "We visited the mine after the accident with other ministers and the prime minister. The mine has a sharp slope and miners have to walk down 400 meters below as there is no elevator or any other mechanism for descending. It takes back almost an hour to return to the surface. How can a worker work under these circumstances?" he asked.

He said mines operated by small companies should be shut down as they cannot cover the costs required to implement necessary safety measures. "Employers do not invest enough for such mines with a lesser number of workers. They keep the costs at a minimum to boost revenue and avoid investing in safety though they are required by regulations," he said.

Çelik said after the accident that the mine was last inspected in June and inspectors handed down fines to the company owners due to eight separate cases of safety negligence. The mine was shut down for three months after the inspection, but the company was allowed to reopen it after those shortcomings were addressed. In September, the mine owner shut it down again after a new law in favor of miners was implemented, complaining that the law increased operating costs. It was reopened again earlier this month.

Speaking to Turkish media outlets, surviving miners and relatives of miners claimed the company cut off benefits for workers and some were not paid for three months.

The accident occurred as miners were having their lunch in one of the galleries of the mine. Workers claimed that the company forced them to eat lunch in the mine instead of going out.

A miner claimed that he quit the job on Oct. 3 because of a lack of safety. He said he formally filed a complaint to the company and told them he could not work under the current conditions. He said that they were extracting coal from 200 meters below the spot where the water burst through but the company ignored his warning.

Though the exact cause of the accident is not known, experts say it is most likely due to mining operations not being interrupted despite the danger of flooding from an adjacent, abandoned mine.

Has Şekerler Madencilik, the company running the Ermenek mine, released a statement yesterday and said all safety measures were in place. "The mine underwent regular inspections and is operated with all legal measures in place. It is impossible to detect what caused the accident at the time but our worker brothers who survived the accident told us it was a natural disaster," the statement said. Mining company officials also downplayed the issue of miners having their lunch underground and said it was a common practice in all mines in Turkey.