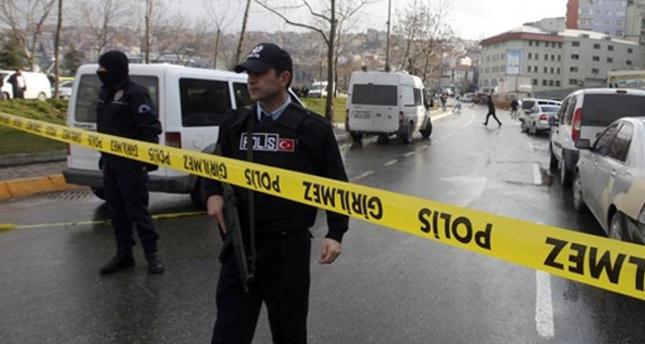 by Daily Sabah with AA Oct 31, 2014 12:00 am
Istanbul police are hunting an unidentified man who went on a rampage on Wednesday night, using a rented car to crash into 11 vehicles before stabbing three people.

The incident happened in the Bahçelievler district on Istanbul's European side, near a street where Prime Minister Ahmet Davutoğlu has a residence he rarely stays in. Three victims were hospitalized after the suspect crashed into almost a dozen vehicles. After getting out of the car, he stabbed an employee of a nearby restaurant.

After wounding another person on the street, the attacker stole a car by stabbing the driver before driving away.

Police are now reviewing CCTV footage to identify the attacker.

Cahit Işık, the owner of the restaurant, told Anadolu Agency that the attacker said he was looking for an "infidel" just before stabbing his employee.

Kenan Dündar, an eyewitness, told AA: "I saw a man stabbing a person with a large knife. Some told me he stabbed another person on the street and drove away by stealing a car. The night was like a nightmare."

Eyewitnesses said the bearded man was acting calmly throughout his attacks, raising doubts whether he was planning to incite provocation.

Since Islamic State of Iraq and al-Sham (ISIS) launched a bloody campaign in Iraq and made its presence felt in Syria, critics of the government accuse it of aiding ISIS militants and allowing them to operate freely in Turkey. Several Turkish media outlets have fuelled ISIS paranoia by often running stories that portray isolated incidents as "broad support" for the group in Turkey. Those include wide coverage of a small, fringe group's mass prayer in Istanbul after pledging allegiance to ISIS, spotting of a bearded teenage wearing an "ISIS t-shirt" on an Istanbul tram.

The terrorist organization PKK itself has used ISIS as a platform to carry out violent riots across Turkey. Accusing the government of "inaction" over the ISIS takeover of Syria's Kobani, PKK supporters killed dozens of ISIS "collaborators" earlier this month. Victims included teenagers working for an Islamic charity and supporters of an opposition party that draws support from conservative Kurds.