Rescue works enter sixth day in the flooded mine 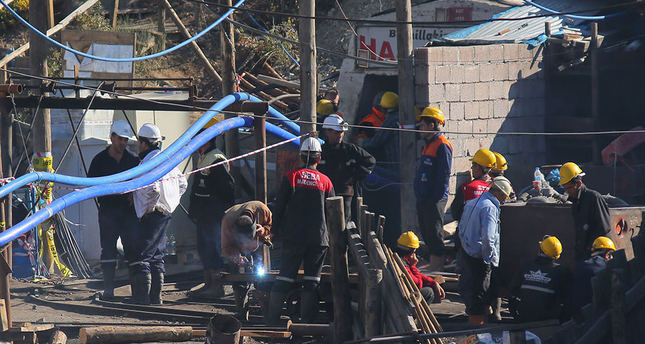 by daily sabah
Nov 02, 2014 12:00 am
Security precautions were increased early Sunday morning as the rescue works entered sixth day in the flooded mine in Ermenek district of central Karaman province.

Turkey's Energy Minister Taner Yıldız said that a quarter of 12,000 tons of water – including mud – still remain in the mine and the targeted amount was reached for water discharge.

Yıldız said that the oxygen level in the mine has decreased as ventilation systems are not working and only the personnel with oxygen masks are being allowed to work inside.

The area where the miners were believed to be lunching when the accident happened became accessible.

Damaged walls of the galleries are being strengthened to secure the rescue operation.

Gendarmerie units tightened identity controls in the area and only the relatives of the miners are being allowed inside the newly created safety line around the mine. The press is also being barred from entering inside the safety line.
Last Update: Nov 02, 2014 12:54 pm