Search continues for those missing from migrant boat 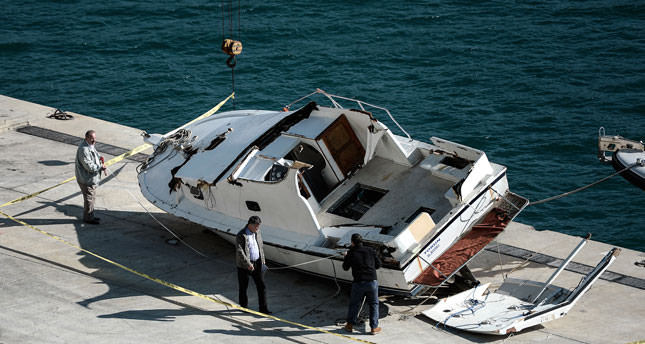 On the second day after a deadly accident in which an overcrowded boat carrying illegal immigrants capsized off the Bosporus coast, crews are still searching for 13 missing people

The death toll, which was initially announced as 20, climbed to 24 when more bodies were retrieved from the sea hours after the boat sank early Monday. Only six survivors were recovered from the site near the Rumelifeneri district of Istanbul, located at the confluence of the Black Sea and the Sea of Marmara in northern Istanbul.

The nationalities of those aboard have not yet been announced, but authorities said the majority of them were likely Afghan immigrants who set sail from a seaside district south of the scene.

Darkness posed a challenge to efforts to locate those still missing and a Coast Guard vessel equipped to operate at night was the only ship used in search efforts on Monday night. More crews resumed the operations yesterday morning, combing the sea in the company of local fishermen and helicopters.

The boat was reportedly carrying 43 people including a captain and two crewmembers. Migrants included children and women whose their journey for a better life in Europe ended tragically in this last gateway to Europe for migrants from Asia and the Middle East.

Turkish media reports that an aggressive crackdown by the Coast Guard against human traffickers and illegal immigrants in the Aegean Sea in Turkey's west coast has forced both groups to change their course and set out from Istanbul, a rarely preferred route. A large number of illegal immigrants were captured before they left several Istanbul ports aboard shoddy boats in the past month, but the 12-meter long boat that sank off Rumelifeneri managed to evade authorities. The media reported that smugglers were paid TL 7,000 ($3,153) for each person aboard and they charged migrants with extra fees for lifejackets. However, they turned out to be faulty, as corpses were found with lifejackets that were not inflated, according to accounts of eyewitnesses.

Experts and eyewitnesses attribute a number of causes to the accident, primarily overcrowding. Citing cracks on the boat's hull, some claim a bigger vessel crushed the boat since it was traveling without lights to avoid detection by the Coast Guard. On the other hand, locals claim smugglers deliberately sink boats after safely fleeing aboard another boat tailing the one carrying the illegal immigrants.

As the search continued, another case of migrants escaping death was reported yesterday in Marmaris, a southwestern Turkish town in the province of Muğla. Twelve illegal Syrian immigrants that were attempting to cross to nearby Greek islands aboard a small boat were stranded at sea, clinging onto the wreckage of their capsized boat, before Coast Guard officials rescued them. Turkish authorities also captured 33 illegal immigrants from Iraq, Syria and Myanmar yesterday in border villages of the northwestern Turkish province of Edirne as they attempted to cross into Greece and Bulgaria on foot.

Turkey, located in a region connecting Asia and Europe, is a main gateway for illegal immigrants pursuing a better life in European countries. Although strict security measures are taken on the borders, it still faces an influx of migrants who risk their lives and pay their scarce, hard-earned cash to smugglers for entry into Greece and Bulgaria, which border Turkey. Those who lost their lives in Monday's accident on the Bosporus were reportedly heading to Romania, located further away from Turkey's two neighbors.

Prime Minister Ahmet Davutoğlu said after the accident that illegal immigration was one of the basic problems facing both Turkey and the entirety of Europe, especially countries with coastlines facing the Mediterranean Sea. He said they would take all measures to stop illegal immigration so to prevent people from losing their lives.

Releasing a written statement, European Union Commissioner for Migration and Home Affairs, Dimitris Avramopoulos, said, "This new deadly incident once again brings to the forefront the urgency to take concrete action to save lives, to address irregular migration, and to help those in need of protection. It is imperative to improve cooperation on this matter with countries that function as departure points for migrants seeking to reach EU countries. I will continue to follow the situation as it develops and will be in contact with the relevant authorities of all involved and the affected countries. Moreover, I plan to present a comprehensive approach with the aim of addressing the issue in a more effective manner."