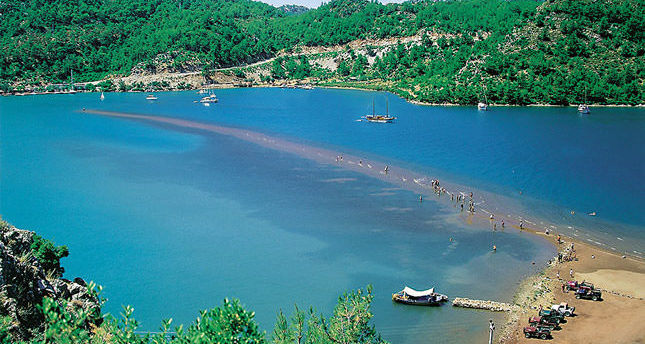 by daily sabah
Nov 07, 2014 12:00 am
Turkey's diverse climate sees tourists tanning on lounge chairs on its beaches in the south and villagers looking for a way out of their snowbound abodes in the north and east at the same time.

In Fethiye, a popular summer resort in the southwestern Turkish province of Muğla, Turks and foreign tourists flock to beaches that see temperatures hover around 24 degrees Celsius. Some spend the week by lazing on the beach under a scorching sun while others took to higher ground for paragliding, a popular activity in the region. It is traditionally the off-season for tourism, but steadily increasing temperatures is leading many holidaymakers to extend their trips.

Meanwhile, the country's Black Sea region in the north is struggling with snowfall that has closed roads to remote villages throughout the week. Two inspiring stories about snowbound villagers have emerged out of reports about the bad weather.

In Rize, a northern province, Mustafa Yeniçırak, 70, was stranded while shepherding his goats in a mountainous area three days ago as snowfall engulfed the area. His family alerted authorities and helicopters were dispatched to locate the elderly man. He was found safe and sound since he had a shelter to keep him warm, as well as enough food. However, the shepherd was concerned about his 250 goats that had nothing to eat since snow had covered the pasture on which they were grazing. Rescue crews shared his concern as well, but luckily had fodder with them. A military helicopter hovering over the site, airdropped fodder for the goats and left two of the shepherd's sons in the area to take care of the herd. The helicopter then left with Yeniçırak. Speaking to reporters after he was rescued, the elderly shepherd said he was not afraid of freezing and starving. "But I was worried about the goats. I've lived my life in full but I felt bad for them," Yeniçırak said.

Elsewhere in the Black Sea region, a young woman in Artvin province raced against time to reach a hospital in order to give birth after heavy snowfall closed the road to her village. Feride Balcı ended up in Adjara, an autonomous region in Georgia, in her hasty and lengthy journey to a hospital.

Balcı, 26, lives in a village in Artvin's Borçka district and her village, located on the Turkish-Georgian border, is snowbound for almost six months every year. As her labor pains began, the woman's family called paramedics to take her to a hospital in central Borçka. An ambulance accompanied by a crew from the Emergency and Disaster Management Authority (AFAD) and road maintenance workers clearing the road were dispatched to the village some 50 kilometers away from central district. The one and a half meter deep snow coverage hindered efforts and crews could only advance 15 kilometers. When the ambulance could not advance any more, authorities advised the villagers to take the woman to neighboring Georgia. Villagers carried the woman to Batumi, in Georgia's autonomous Republic of Adjara. Turkish crews were then sent to Georgia to transport the pregnant woman back to Turkey, but as Balcı's labor pains intensified, she had to be taken to a Georgian hospital. Balcı gave birth to a baby boy there, her third child.