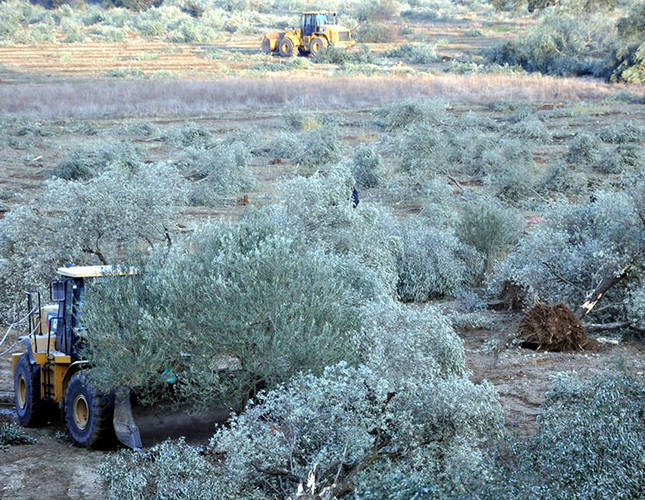 by Daily Sabah with Agencies
Nov 09, 2014 12:00 am
Speaking over the incident in which thousands of olive trees were cut down to build a power plant, Turkey's Deputy Prime Minister Numan Kurtulmuş stated, "We cannot forsake the environment for the rules of wild capitalism" on Saturday.

Emphasizing the need for power plants, he added "We have to come up with a middle way between the environment and development."

"We shouldn't ruin the nature by justifying it with the economy."

A Turkish conglomerate named Kolin Group sparked anger throughout the nation when 6,000 olive trees were uprooted in order to clear an area for a coal power plant in Yırca village, in the western town of Soma.

Turkish media outlets reported that private security guards hired by the Group dragged protesting villagers from the site, locked them in a nearby hut and fired gas canisters.

The village headman participating in live TV coverage about the incident was unable to hold back his tears as he explained the situation.

The High Administrative Court of Turkey (Danıştay - Turkish Council of State) decided late on Friday to halt the construction.

In May, 301 miners were killed by the explosion and the collapse of a coal mine in Soma district.

Following the accident, working conditions in the Turkish mining sector were widely debated in various media outlets. Many experts stated that the villages were becoming more and more dependent on jobs in the mines owing to a lack of agricultural land or uneconomical practices by the villagers and the state.

Olive cultivation and processing is one of the most important economic activities of northern and central Aegean regions of western Turkey, including Soma.

Turkey's Environment and Urbanization Ministry has an ongoing campaign against building on agricultural sites.