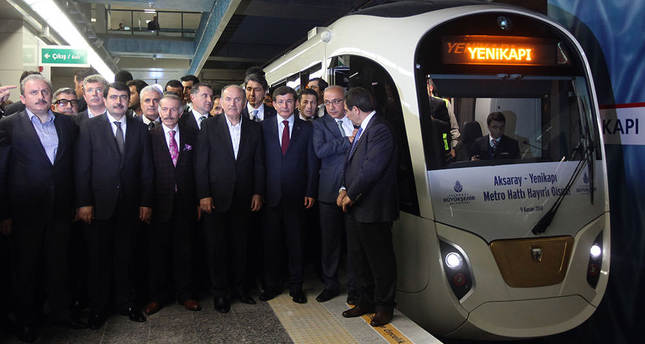 by daily sabah Nov 09, 2014 12:00 am
The metro line built between Aksaray and Yenikapı, which connects the Marmaray underwater tunnel at Yenikapı with the metro line of the European side of Istanbul, opened yesterday at a ceremony attended by Prime Minister Ahmet Davutoğlu.

The Marmaray, which is already linked to the metro line on the Asian side, was inaugurated last year. The link opened yesterday will connect the lines on both sides of Istanbul. A person in Kartal on the Anatolian side will be able to travel to Atatürk International Airport on the European side in 81 minutes by using only railway transport. With the Aksaray-Yenikapı metro line, passengers in Yenikapı will be able to travel to Taksim with a single transfer.

According to municipal officials, travel time between Yenikapı and Atatürk airport will be 36 minutes, Taksim to the airport 43.5 minutes, Mahmutbey to Üsküdar 44.5 minutes and Bağcılar to Kadıköy 45.5 minutes. Davutoğlu, speaking at the opening ceremony, said Istanbul currently had 141 kilometers of metro lines, to be increased to 430 milometers by 2019. The prime minister also said that Istanbul, a city with an ancient heritage, needs public transportation to be underground in order to protect and preserve the historical heritage above ground and that the government is committed to easing the traffic burden in the city.