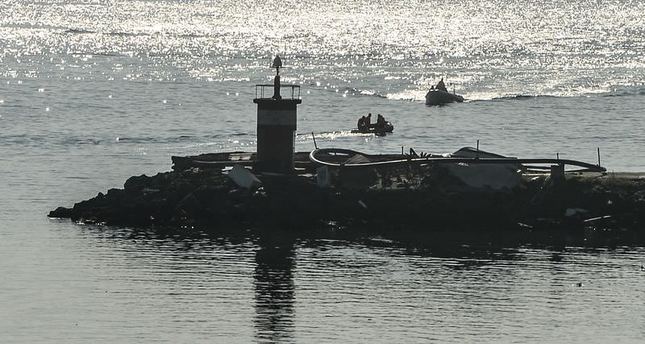 by AA
Nov 11, 2014 12:00 am
A swine was detected crossing the Bosphorus Strait in İstanbul on Monday - the third such sighting in a fortnight.

The pig was discovered off the shore of the Eminönü district, near the conjunction point of Golden Horn and the Bosphorus, which is a naval hub and a port to cruisers.

Officers from the Turkish Ministry of Environment and from the İstanbul municipality caught the swine after it was seen in the northern part of the strait on Friday night, leading Turkish coastal safety guards to set chase.

Last Tuesday, another swine drew attention to itself, after landing in Bebek district, a jet-set neighborhood, to take refuge in a mansion's yard near the Bosphorus.

Both pigs were taken back and set free in the northern forests of İstanbul, from where they had apparently traveled.

A group of pigs were also seen last year crossing the European side of the city to the Anatolian side, as reported by the daily Habertürk, thus igniting a debate over the fate of displaced animals.

Experts have warned İstanbulites to be ready of more frequent sightings of wild animals in urban areas, since large-scale urbanization has reduced their natural habitat in the fauna.

Environment and Urbanization Minister İdris Güllüce said that the situation should not be exaggerated, and that these incidents were being over-emphasized by the media, in his response to press over the issue last Wednesday.