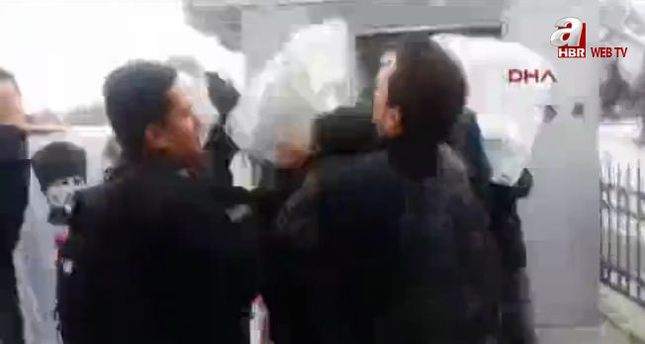 by daily sabah
Nov 12, 2014 12:00 am
A group of activists from ultra-right United Youth Union (TGB) put sacks on the heads of American soldiers in Istanbul to protest "American imperialism" yesterday. The controversial group is known to be one of the most important groups who took place at the Gezi Park protests which occurred in Istanbul's Taksim Square as demonstrations against a development project mushroomed into nation-wide mass protests against the government, resulting in the deaths of eight people, including a police officer.

The unidentified soldiers in civilian clothes were walking in Eminönü, a central district of Istanbul, when activists from the TGB approached one of them and asked whether he was with the sailors aboard the USS Ross, a U.S. navy ship anchored on Istanbul's Sarayburnu coast after returning from a military exercise in the Black Sea. When the soldier nodded yes, one of the activists said, "You declared that you are a member of the U.S. army and now because we define you as murderers, as killers, we want you to get out of our lands. We are using our right to protest you." Then, the angry mob threw red paint on the soldier and put sacks on his head. The terrified soldiers managed to get away while the mob chased them shouting, "Yankee go home." Turkish police arrived at the scene and detained 12 members of the 50-strong mob.

Speaking on behalf of the mob, TGB Istanbul president Uğur Aytaç said they were "proud to be detained for such a reason. They were afraid. They should be because we will not give them a rest," Aytaç said.

The TGB is known for similar attacks on U.S. soldiers visiting Turkey. Putting sacks on U.S. soldiers is viewed as "vengeance" for the infamous "hood event" in Iraq. In 2003 a group of Turkish troops operating in Sulaymaniyah in northern Iraq as part of a special forces team, were detained by U.S. troops who raided their safe house, allegedly acting on a tip-off that Turkmens in the safe house would carry out an assassination of a local Iraqi politician. The U.S. troops put hoods on the captured military personnel, which including a major. The incident caused public outrage in Turkey and the soldiers were released after 60 hours in captivity.

The U.S. embassy in Ankara released a statement regarding the incident and branded it "appalling." "While we respect the right to peaceful protest and freedom of expression, we condemn today's attack in Istanbul and have no doubt the vast majority of Turks would join us in rejecting an action that so disrespects Turkey's reputation for hospitality," the statement reads.