Anti-American activist group who harassed US soldiers released by court 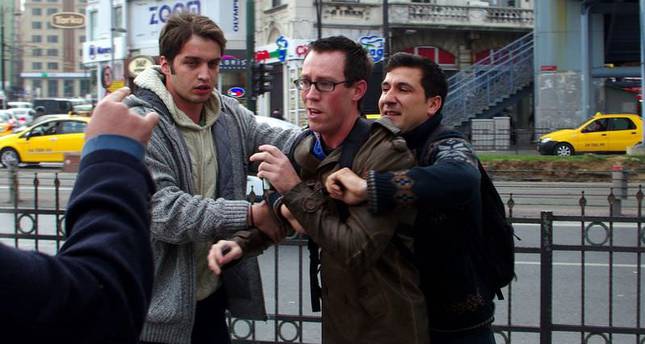 12 members of the ultra-right United Youth Union (TGB), who put sacks on the heads of American soldiers in Istanbul to protest 'American imperialism', have been released a day after they were detained.

12 members of TGB - known to be one of the most important groups who took part in the Gezi Park protests - were detained on Wednesday for harassing unidentified American soldiers in civilian clothes in Eminönü. They were referred to court early on Thursday after they had undergone medical screenings. The court later decided to release the offenders, finding further interrogation by the prosecutor's office unnecessary.

The soldiers were walking in Eminönü, a central district of Istanbul, when activists from the TGB approached one of them and asked whether he was with the sailors aboard the USS Ross, a U.S. navy ship, which has been anchored on Istanbul's Sarayburnu coast after having returned from a military exercise in the Black Sea. When the soldier nodded yes, one of the activists replied, "You have declared that you are a member of the U.S. army and now, because we define you as murderers, as killers, we want you to get out of our lands. We are using our right to protest you."

The angry mob then threw red paint on the soldiers and put sacks over their heads. The terrified soldiers managed to get away while the mob chased them shouting, "Yankees go home." Turkish police arrived at the scene and detained 12 members of the 50-strong mob.

The self pro-claimed "Youth Union of Turkey" is widely known by that name. However, this is an illegal attempt on their part since the Turkish Council of Ministers must approve any group's name wishing to use "Turkey" in its title.