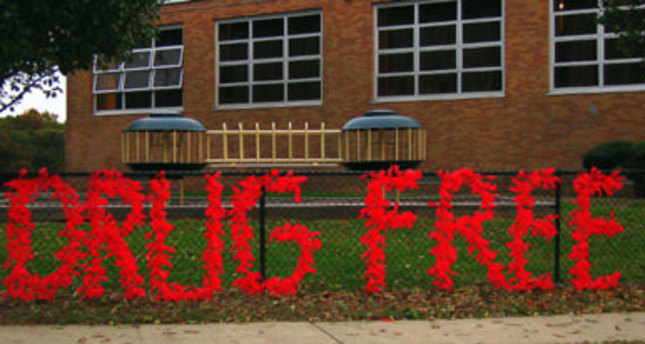 by Eda Işık Nov 13, 2014 12:00 am
Stepping up efforts to combat drug use among the country's young generation, the government has readied an action plan that aims to raise awareness against drugs and actively prevent their use.

The Anti-Drug Action Plan will be discussed at a workshop which will be attended by Prime Minister Ahmet Davutoğlu, relevant authorities, representatives of nongovernmental organizations, celebrities and athletes later this month. The government is seeking the aid of well-known actors, singers, football players and other sports figures in the counter-narcotics efforts. Those celebrities will act as "role models" under the action plan.

According to media reports, the government also plans to introduce a roadmap in curbing drug use by helping students. The Ministry of National Education has determined that students between the ages of 12 and 18 are the primary group at risk from drug addiction. To address the causes driving them to drug use, the ministry will assign teachers, consultants and other staff to train them in handling the stress of school life, conflict resolution, fighting peer pressure, anger management and related issues. Teachers will be educated on how to detect drug use in students.

The government has already announced the assignment of policemen in the vicinity of schools to deter drug peddlers.

Necdet Ünüvar, head of Turkish parliament's Health Committee and one of the architects of the action plan, said they had studied how other countries are combatting drug use and focused on drug courts in the U.S. that help drug abusers recover, rather than incarcerating them, and hotlines helping drug addicts. Ünüvar said celebrities had a significant influence on the public and they sought to use their clout to curb drug addiction.

The plan is being coordinated by several ministries to take steps against drug abuse, especially among high school youths. The plan aims to detect troubled youth with an inclination to drug abuse earlier and provide them with treatment.

A new bill that recently passed in Parliament had extended prison terms for drug peddlers, particularly convicts caught peddling drugs outside or near schools and those selling drugs to people under the age of 18.

Green Crescent Society officials claim that a 2013 survey among students in Istanbul showed that 9 percent of 32,000 students in high schools took drugs.