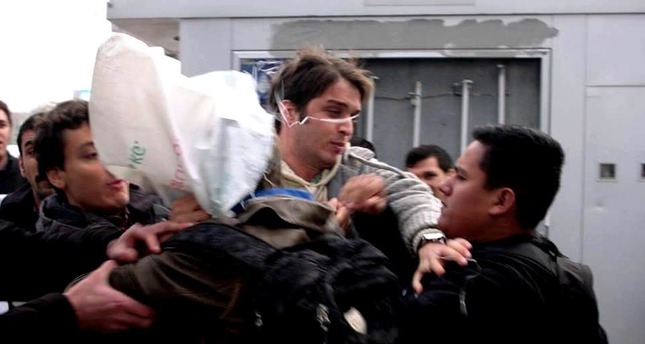 Members of a violent youth group, known for leading Gezi Park protests and having a pro-Assad stance, once again attempt to divert attention from key issues of concern through an attack on U.S. soldiers

The United Youth Union (TGB) made the headlines when its members attempted to put sacks over the heads of U.S. soldiers in Istanbul on Wednesday, the latest attack by the fringe group which played an active role in the 2013 Gezi Park riots. The group, which pursues a strict anti-American stance, staged the attack "in retaliation" for the Turkish troops that were detained in 2003 in Iraq by U.S. troops. Yet, extensive coverage of the incident not attached to the group's similar attacks in the past, has raised questions about whether it is part of a plot to drive anti-American sentiment in Turkey.

The group, which is known as one of main provocateurs of the Gezi Park riots, is also a fierce supporter of the Assad regime in Syria, which makes the timing of the attack more dubious as Turkey calls on the U.S. to take further action against the Assad regime. Footage of the attack was posted online by the group. In the video, TGB members approach three sailors in civilian clothes in Istanbul's Eminönü district as the soldiers are walking on the street. They shout "murderers" at the sailors and attempt to grab them while some assailants throw red paint on them.

Two soldiers escape the clutches of the mob but assailants manage to force a sack over the head of one of the soldiers briefly. As soldiers started fleeing, the mob chased them while chanting "Yankees go home."

Istanbul police detained 12 people on charges of inflicting injury, insult and violation of protest and rally law but they were later released by a prosecutor, although an investigation is still ongoing.

The assailants found support from a lawmaker from the opposition Republican People's Party (CHP). Speaking to reporters outside an Istanbul courthouse where the released detainees met fellow TGB members, Süheyl Batum called for the support of "the youth" and criticized the statement by U.S. officials regarding the attack. Çağdaş Cengiz, head of the TGB, was among the detainees released yesterday. Addressing a crowd of his supporters as he exited a courthouse on Istanbul's European side, Cengiz said it was "a duty of Turkish youth to put sacks over hired killers from the United States."

Speaking on behalf of activists hours after the attack on Wednesday, TGB Istanbul president Uğur Aytaç said they were "proud to be detained for such a reason."

"They were afraid. They should be because we will not allow them to rest," Aytaç said.

Turkish and U.S. officials condemned the attack. Tanju Bilgiç, a spokesman for the Foreign Ministry defined it as "a disrespectful act that is in no way tolerable." The U.S. embassy in Turkey said in a statement that "while we respect the right to peaceful protest and freedom of expression, we condemn the attack and have no doubt the vast majority of Turks would join us in rejecting an action that so disrespects Turkey's reputation for hospitality."

Harsher remarks came from the Pentagon. U.S. military spokesman Col. Steven Warren told reporters that they found the attack "ugly and disturbing." He said the attack was carried out by "apparent thugs on the street." Col. Warren stated that they were "working closely with Turkish authorities to have this investigated and get to the bottom of what happened."

The group has staged similar attacks in previous years. In October 2011, TGB members forced a sack over the head of Jesus Salazar Munoz, a sailor on shore leave from a U.S. Navy vessel in the southwestern Turkish town of Bodrum. In January 2013, TGB members attempted to stage another "sack" attack on German soldiers in the southern town of İskenderun. Seven soldiers, who were in Turkey as part of a NATO mission, managed to flee from some 30 TGB members.

Putting sacks over U.S. soldiers is viewed as "vengeance" for the infamous "hood event" in Iraq. In 2003, a group of Turkish troops operating in Northern Iraq's Sulaymaniyah as part of a special forces team, were detained by U.S. troops raiding their safe house, allegedly acting on a tip-off that Turkmens in the safe house would carry out an assassination of a local Iraqi politician. U.S. troops put hoods over the captured military personnel, including a major. The incident caused public outrage in Turkey and soldiers were released after 60 hours in captivity.

The TGB, which brands itself as a Youth Union of Turkey, although it was not allowed to use the title officially, was one of the main provocateurs of the Gezi Park protests in the summer of 2013 that started off as a peaceful protest by environmental activists and evolved into violent riots. The group's leader Çağdaş Cengiz stated that the Gezi Park demonstration "was not about the park but overthrowing the government." He has claimed that the government would fall "in the face of an uprising" and defended that "overthrowing the government" was "a democratic stance."

The fringe group, founded in 2006 by a group of university students, is an affiliate of the Labor Party (İP) that evolved into an ultranationalist political movement from a left-wing party. Along with involvement in Gezi Park riots, they drew the ire of other groups taking part in riots for their racist attitude towards pro-Kurdish rioters. The TGB defines itself as Atatürkist and anti-imperialist, claiming they are followers of the Republic of Turkey's founder Mustafa Kemal Atatürk's "anti-imperialist vision." The group is under fire by similar opposition movements for its ultranationalist line and stance in support of the past military coups and decades of military tutelage that ended after the AK Party came to power. The TGB is also known for its pro-Assad stance on the Syrian conflict and is accused of siding with China and Russia while claiming to fight against "imperialist" forces.

Cengiz Alğan, a prominent human rights activist and one of the founders of Revolutionary Socialist Workers' Party (DSİP), spoke to Daily Sabah about the TGB's latest attack. Alğan, who had participated in the peaceful Gezi Park protest against the redevelopment of the park in Istanbul, criticized the TGB saying, "This is not your ordinary left-wing group. It carries out 'special operations' in critical times to change public perception on one issue and to boost their own publicity. This latest attack is one of such operations," Alğan said. He stated that it was "worth investigating" how the TGB found out that three men, all in civilian clothes, were actually U.S. soldiers.

Alğan said the type of attack also bore resemblance to protests against the U.S. Navy's Sixth Fleet in 1968 in Turkey. "This is no different than those protests that sought 'to throw Johnnies (a nickname for U.S. soldiers) into the sea.' It is the product of an archaic mindset and shows how Stalinist left-wing groups have failed to progress in four decades other than calling 'Yankees go home,' " Alğan said.

He attributed the wide coverage of the incident in international media to the "enormous black propaganda against the government that has been continuing since the Gezi Park incidents."

"Whenever Turkey focuses on resolving its problems on its own, some powers intervene [and run black propaganda]. It apparently aims to undermine efforts to resolve the Kurdish questions," Alğan said, referring to the reconciliation process initiated by the government to address the problems Kurds faced in Turkey and end a bloody campaign by the terrorist organization PKK.

Alğan also pointed out that the self-proclaimed Islamic State of Iraq and al-Sham (ISIS) praised the TGB for the attack, though both groups position themselves on the different ends of an ideological spectrum.

Daily Sabah Reader's Representative İbrahim Altay offered an insight into "manipulating" coverage of the incident in the U.S. media. Referring to articles in the foreign press which "hid the fact that the TGB was a supporter of the Syrian regime and an active proponent of the Gezi Park riots," Altay criticized a New York Times story on the incident. He said the "scandalous" article had a warped, forced narrative and did not delve into the cause and consequences of the incident.

Altay stated that The New York Times article was heavily prejudiced and attempted to show an anti-U.S. sentiment in Turkey based on a recent poll as a result of the Turkish government's Syria policy. He added that it dismissed the underlying reason for the sentiment that is a "history of conflicts [in which] the United States took part." "The New York Times has been a mouthpiece of an anti-Turkey campaign for a while with its biased editorials stained with mistakes. It turned into a representative of [an anti-Turkey] lobby in the United States unfortunately," Altay said.

He pointed out that foreign media companies such as CNN, BBC and The New York Times presented the Gezi Park riots as an environmental protest and treated rioters as people executing their freedom of expression. "They portrayed them as peaceful youth and turned a blind eye to acts of vandalism and terrorism. Apparently, they did not consider that the riots would someday pave the way for [anti-American sentiment]."

The New York Times article about the attack, attributes the assault and its publicity to "tensions between the United States and Turkey" allegedly over "Turkish reluctance to fully embrace the American-led military strikes against ISIS." The article describes the TGB as "a small group" while claiming that "it will appeal to the wider public," quoting an official from the German Marshall Fund that conducted a survey on anti-American sentiment in Turkey and found more than half of Turkish interviewees held an unfavorable view of the U.S.

Speaking to Daily Sabah, columnist Yıldıray Oğur defined the TGB as a "youth branch of the Atatürkist, secular and socialist Labor Party (İP)." "It is a group known for its visits to Syria to show their endorsement to the Assad regime and its role in the Gezi Park protests. They have been staging these [assaults on U.S. soldiers] for years to retaliate the hood incident in Iraq. In light of all these, it is either a case of great ignorance or a deliberate disinformation to linking this incident to disagreement of the AK Party government with the United States administration in operations against ISIS," Oğur said.