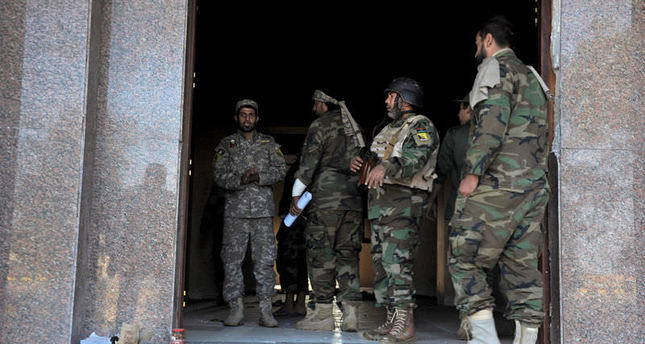 by Daily Sabah with AA
Nov 14, 2014 12:00 am
Nine Turkish citizens, who had been detained in Libya, have been handed to the interim Libyan government by pro-Haftar forces on Friday.

The nine Turkish citizens were detained when they were leaving Benghazi to Misurata to leave Libya.


"We released nine Turkish citizens who were apprehended two weeks ago near clashes that had broken out in Benghazi," Mohamed Hegazi, a spokesman for Haftar's forces, told Anadolu Agency.

"The nine Turks were handed over to the interim Libyan government [headed by Abdullah al-Thinni] as per the instructions of the General Command of the Libyan National Army [Haftar's forces]," Higazi said.

Investigations had revealed that the nine Turkish nationals "were not involved in anything," he added.

Benghazi has been the scene of increasing military conflict between the rival militias and the government military forces since the 2011 uprisings and death of Moammar Gadhafi, the Libyan former leader.

There has been an ongoing conflict and a state of war in Libya, since the rival militias have frequently clashing in the main cities, including the capital Tripoli and Benghazi, with the central government that has been trying to maintain order.
Last Update: Nov 14, 2014 8:12 pm