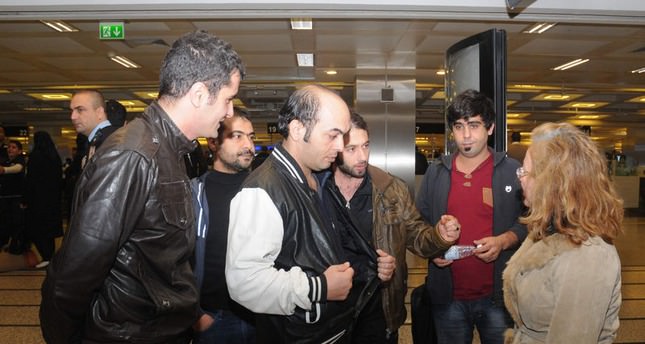 by AA
Nov 15, 2014 12:00 am
Nine Turkish citizens abducted in Libya on October 31 arrived in Istanbul on Saturday night, according to a report from The Anadolu Agency's correspondent.

The freed citizens flew back on a Libyan carrier, and landed at Istanbul's Ataturk Airport at around 21:30 p.m. (19:30GMT).

The nine Turkish citizens were taken by a group of soldiers as they were on their way to leave Libya from the northwestern Misrata city on October 31.

Foreign Ministry officials took action on November 3 after learning of the kidnapping from a Turkish citizen who works in Benghazi.

On Friday, forces loyal to former Libyan army chief Khalifa Haftar announced that they had handed the nine Turkish nationals, who had been held in the eastern city of Benghazi, to the government of Abdullah al-Thinni.

The nine Turks are reportedly in good health.

Libya has been torn by civil war since the 2011 ouster and death of Colonel Muammar Gaddafi by several militias which afterwards refused to lay down their arms.