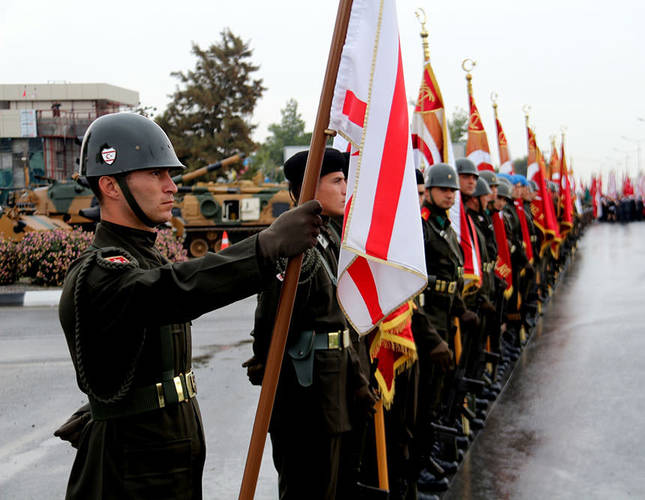 by daily sabah
Nov 15, 2014 12:00 am
Turkish Republic of Northern Cyprus (TRNC) celebrated its 31st anniversary of the Republic on Saturday.

"Statehood of Turkish Cypriots is the most important inheritance to be passed over to future generations" Eroğlu said.

Eroğlu stated that the Greek Cypriot leaders are against a federation and do not want to share Cyprus's sovereignty, state and representation with Turkish Cypriots.

He also stated that the Greek Cypriots' main reason for suspending negotiations was hydrocarbon resources.

"It is naturally not possible to let the Greek Cypriot side act like it is the only owner of the island," said Turkish Deputy Prime Minister Bulent Arınç in a speech in Lefkosa, reiterating the TRNC's rights over natural resources in the east of the Mediterranean. Arınç also urged Greek Cypriot authorities to "turn back from the wrong way" and return to the negotiation table and put their "sincere efforts" in action under a process chaired by the U.N.

Turkish Cypriots and Greek Cypriots resumed negotiations after a two-year pause in February 2013. The previous round of talks had collapsed, partly because of the impact of the eurozone debt crisis on the government in Nicosia.

TRNC was founded in November 15, 1983, following 7 years of futile diplomatic efforts to re-unite Cyprus. TRNC citizens have been exposed to embargo, isolation and discrimination for forty years given the state is only recognized by Turkey although the country has an economic potential and a functioning government. TRNC however, has unofficial representatives across the world.

The island was divided in 1974 following Turkey's military response against a right-wing Greek military coup d'etat which removed President Makarios III from power and aimed to unite the island with Greece.

Although Turkey is constantly blamed for the division of the island with its military intervention, two communities were already divided before the intervention.

After World War II ended, Greek Cypriot groups, who represent the demographic majority of the island, started political and armed struggle against the British rule.

When the Republic of Cyprus was founded in 1960, Turkish Cypriots became the primary target of Greek extremists. Inter-ethnic violence erupted and Turkish Cypriot community was forced to flee their homes and villages to live in enclaves protected by local armed groups.

Greece's military junta, which had ruled the country between 1967 and 1974, supported the extremist groups that eventually made a coup d'etat to unite the island with Greece.

Despite a very active stance in Turkey and Cyprus which supports an absolute division of the island, Turkey made continuous efforts to unite the island in a federative structure.

Turkish Federated State of Cyprus was formed in 1975 to administer the Northern part of the island after Turkey's intervention to Cyprus. Although formed to become a part of a future federation of Cyprus, this move was rejected by the international community, and the isolation began, which left no choice for Turkish Cypriots but seek statehood.

While Turkish Cypriots proved their willingness for a re-unification in the 2004 referendum by approving the Annan Plan – perhaps the most comprehensive UN initiated peace plan that includes numerous concessions on Turkish Cypriots' behalf – the Greek part rejected it mainly due to its economic advantages. Its rejecting the plan was later awarded by the European Union which granted membership to Greek Cyprus putting aside the promises made to Turkish side on not to deepen the imbalance between two communities in case of a negative result in the referendum.

The Greek Cypriots returned to negotiating table, though, shortly after Greece and other European countries were caught up in a huge economic crisis in 2008.

Since then, the main reason for Greek side to continue negotiations seems to have shifted to potential oil resources around the island as they shuttle between seeking a solution and a deadlock at the same time, which is an issue that only contributes to the complexity of the Cyprus dispute.