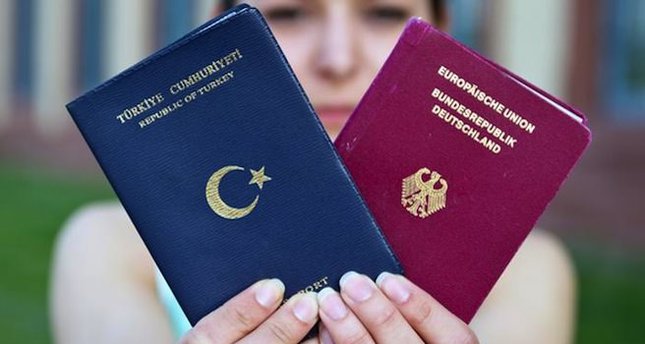 by AA
Nov 16, 2014 12:00 am
According to a survey conducted by the state-run Directorate of Turks Living Abroad and Related Communities (YTB), a majority of Turks living abroad feel isolated in their host country. YTB President Kudret Bülbül said people sharing this sentiment "cannot contribute to the society where they live and cannot improve their status as long as they feel excluded or isolated."

The YTB conducted interviews with Turkish nationals living in Germany, France, Netherlands, Belgium and Austria concerning their status in the countries where they are living.

Bülbül said this survey is conducted regularly every year regarding Turkish expatriates and pointed out that it indicated a worrying and serious problem. He stated that their contribution to the countries they lived in or improving their status would not be realized as long as they felt ostracized. "It is probable that they are forced to remain inactive in terms of that contribution because of that sentiment," he said.

He pointed out that "active citizenship" was one of the basic values of the European Union. "But an individual who feels excluded has no reason to become active. One can confine himself or herself to a limited environment when excluded, and for instance, may shy away from joining the workforce if he or she thinks businesses may reject their application," he said.

The YTB president said his agency was working to make Turks living abroad feel better and contribute more to their host countries. "They will be happier if they can have an active role in politics, economy, arts, et cetera," he said.

In the context of isolation, Bülbül criticized Austria's proposed legislation on Muslims that came under fire for its alleged restriction on religious activities, namely the funding of Islamic organizations and the training of imams. He said the draft bill would remove the equality. "Muslims should have the rights that other religious communities have," he said. "It will violate equality principles and human rights. Seeing differences as a threat will be a loss on the part of Austria," he said, referring to the defense of the legislation by the Austrian government that said the bill aims to curb radical groups' activities.

The number of Turks living in Europe is estimated to be over six million, with Germany leading the host countries with 1.5 million Turkish nationals.