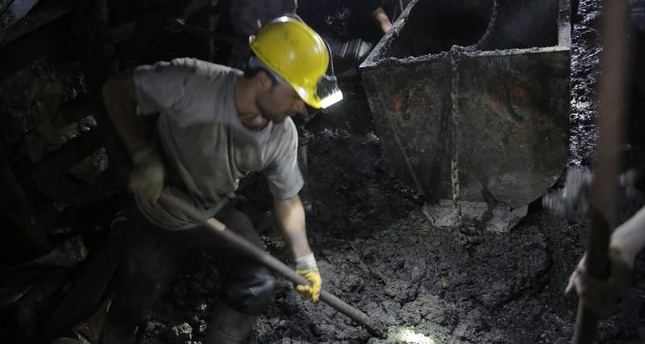 by daily sabah
Nov 18, 2014 12:00 am
The bodies of six miners were recovered from a flooded mine in Ermenek, a district of the central Turkish province of Karaman, yesterday, bringing the confirmed death toll to 10.

The recovery came one day after the bodies of two miners, who had been trapped since Oct. 28, were discovered by rescue crews who have been on the site since the disaster broke out.

With the latest recovery, only eight miners remain trapped in the mine flooded by an outburst of water. Although officials and families of the miners keep their hopes up, it is unlikely that they will be retrieved alive unless they managed to split from co-workers and reached a dry area. This theory, however, is unlikely as authorities say the entire mine was inundated and the galleries collapsed due to the flood.

When the outburst happened, reportedly from an abandoned mine next to the disaster site, there were 34 workers inside the mine. They were having a lunch break underground and 16 workers, noticing the walls cracking and waters filling the mine, managed to flee in time while 18 others remained trapped some 300 meters below the surface.

The remaining miners are expected to be retrieved in the coming days although the slime, formed during the draining of water from inside the mine, poses a major challenge to crews digging through the site. The first two bodies were recovered on the 11th day of the rescue efforts.
The incident, which followed a May mining disaster that killed 301 workers in western Turkey, caused a public outcry over the lack of work safety in the mining sector. The government pledged tougher measures against the mining companies neglecting the safety of workers and introduced new legislations. The owner of the mine in Ermenek and other top officials of the mining company were arrested on charges of involuntary manslaughter for ignoring the safety of workers. The company owner has defended himself, claiming he was not aware of a flood threat from the abandoned mine located next to his mine.