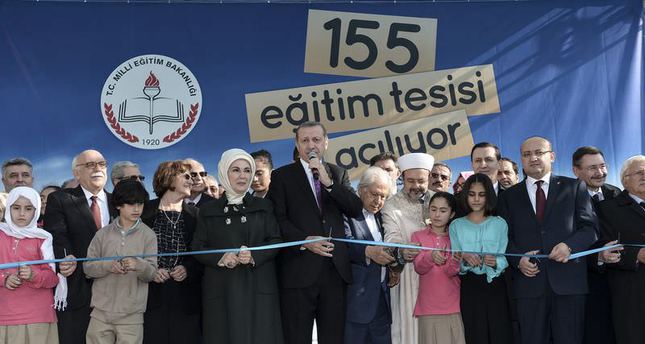 by Daily Sabah Nov 19, 2014 12:00 am
Speaking at an imam-hatip school in the capital city of Ankara yesterday, President Recep Tayyip Erdoğan addressed the "cruelty" that Muslim parents of students attending those schools and the students themselves fhad aced in the past, and vowed that Turkey would not return to "those days."

The president attended an inauguration ceremony for 155 schools in Ankara that was held at Tevfik İleri Anatolian imam-hatip school. Addressing the crowd, mostly students of the vocational school that provides a mixed curriculum of Islamic theology and non-religious subjects, Erdoğan remembered the history of those schools.

"The imam-hatip schools were depicted as dangerous places in the February 28 coup process," he said in his speech, referring to the "post-modern coup" in 1997 that forced the government to resign following a massive witch-hunt against the conservative government, jointly conducted by the top military brass and secular elite. "These schools were unfairly accused of being home to enemies of the state, and children attending them were stigmatized," he said. "We proved how unfair these accusations were. These people they branded reactionary succeeded in the end. One of them is now president," Erdoğan said, referring to his own imam-hatip school background.

Speaking further on the pre-coup times, Erdoğan said the religious population suffered greatly and hoped that they would not go through those days again. "They closed down imam-hatip middle schools and high school students were forced to graduate with lower points, thus, could not attend the universities of their choice. I am the father of students who suffered during those times and I know how imam-hatip students felt," he said. Erdoğan noted that he led the efforts to lift the restrictions on imam-hatip schools during his tenure as prime minister such as offering them equal access to universities with graduates of other schools and the lifting of the headscarf ban for middle school students. "This cruelty is over. We cleared all the obstacles in the way of imam-hatip students. The number of imam-hatip students rose to 983,000 this year from 64,500 in 2002," he said.

Describing a conversation he had with an imam-hatip student, Erdoğan said, "This girl met me in Edirne [a northwestern city] while I was visiting in 2013. She handed me a letter. She was asking for the building of a bigger imam-hatip school in her small town, so I telephoned her later. She was crying and told me the existing school was too small. I spoke with the minister of education and the governor and after receiving support from philanthropists, the construction of the school will start soon," he said.

Erdoğan told the imam-hatip students in Ankara that they should not allow "those dark times to return."

"Learn from what we went through, how your elder brothers and sisters suffered. Remember those who had to study abroad, almost like exiles," he said, referring to students who refused to remove their headscarf to attend schools in Turkey and had to study at schools abroad. "Their suffering was conducive in a way. They returned to Turkey as accomplished doctors, engineers and members of other professions," he said.

The president also directed a thinly-veiled criticism toward the Gülen Movement. "We did not bow down to those who call the headscarf "a detail" and did not abandon our cause despite this grand betrayal," Erdoğan said, referring to shadowy cleric Fethullah Gülen's remarks that the headscarf was "simply a detail," much to the chagrin of Muslims who viewed the cleric as a supporter of headscarf-wearing women.