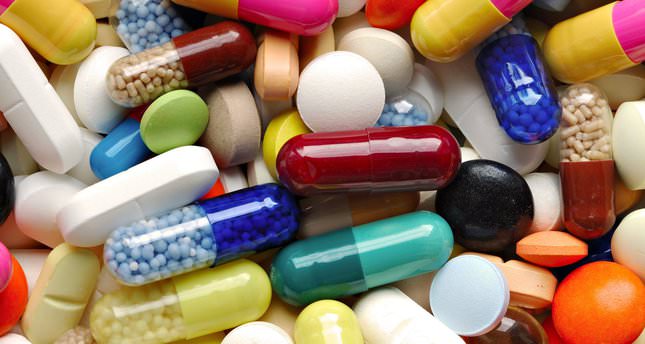 Consumption of medicine, antibiotics in particular, have reached to a concerning level in Turkey, according to experts, as a report by the Ministry of Health shows about 26 boxes of medicine a consumed per person every year in the country

The report also revealed that the amount spent on medicine reached TL 16.3 billion ($7.3 billion) by the end of 2013. The medicine consumption rate has risen 21.8 percent in the last five years, while expenditures rose 20.8 percent in the same period.

The majority of drugs consumed are imported, according to the report, with locally made drug consumption declining to 46 percent in the five years between 2008 and 2013.

Professor Oral Öncül from Istanbul University's Faculty of Medicine says people in Turkey excessively use antibiotics. Speaking to Anadolu Agency, Öncül said 40 percent of drugs prescribed to patients every year are antibiotics. "Turkey is among the European countries with the highest rate of antibiotics use," he says. Öncül attributes the phenomenon to easy access to antibiotics and their high treatment rate.

Öncül says that antibiotic use is limited by health authorities in other countries. "They are prescribed drugs, and their prescription is confined in other countries, but in Turkey and some other countries, they are sold without a prescription. People purchasing these drugs without consulting their doctors unwittingly pave the way for more serious problems. Excessive, unnecessary use of antibiotics helps microorganisms to become immune to these drugs. The rising resistance to antibiotics limits our options for treatment of infections," Öncül said. It creates a domino effect according to Öncül. "Patients' immunity weakens, and this leads to longer stays at hospitals, more use of antibiotics and eventually, to higher costs for health care and, in some cases, it even leads to deaths," he says.

Health Ministry Undersecretary Eyüp Gümüş has warned the public of unnecessary use of antibiotics and said that his ministry would launch an action plan to curb the phenomenon. Speaking at an event regarding the use of antibiotics, Gümüş said people should use only prescribed antibiotics and only when they really need it. He pointed out a common misperception among the public that doctors not prescribing antibiotics were viewed as "inexperienced." "You should not insist on being prescribed antibiotics, especially to consume them as painkillers or to make fever less severe," he said.

"Drugs compose about one third of medical expenses, and nearly half of those drugs are antibiotics. We will launch an action plan for the 'smart' use of antibiotics and efforts for antimicrobial resistance," Gümüş said. The plan will also include an awareness campaign to make people more conscious about the correct use of antibiotics.

Looking into the financial aspect of medicine use, Saim Kerman, head of the Health Ministry's Medicine and Medical Equipment Agency, says they aim to minimize Turkey's dependency on imported medicine. Kerman says imported drugs are five times more expensive than locally made drugs, but they are more favorable due to a lack of product range in local drugs. "We have nearly 78 percent production substitution and 22 percent import substitution, and imports are naturally more expensive. Still, over 50 percent of the drug supplies are imports," Kerman told Anadolu Agency. He said the pricing policies contributed to the unavailability of some drugs in the local market. Pricing is based on European countries, such as Greece and Spain, and a significant fall in drug costs in those countries affected Turkey as well, causing losses for local drug companies. Kerman says although they managed to improve the discount rates in some drugs, it was not sufficient, and they presented a regulation to the government for pricing drugs independent of fluctuating drug markets in other countries in case of the unavailability of those drugs. Kerman said the current deficit in drugs and medical equipment was high, and they needed measures to counter it. "We plan to acquire needed drugs from domestic producers. When the state obtains drugs for public use from domestic producers, it means a huge boost to the sector," Kerman said. "We spent $60 billion in the last decade for drug imports. We could have spent it on something else if we had sustainable domestic production. Now, we will focus on domestic producers, so that we will be able to curb the expenses and raise tax revenues from local medicine sector and manpower," he said.