Governor under criticism for synagogue comments 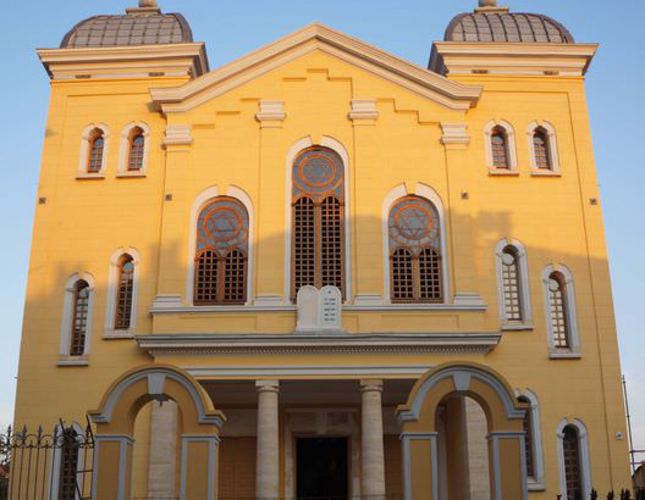 The Foundations Department spent TL 4.5 million for the restoration of the Edirne Synagogue, which will continue to serve as a house of worship.

Edirne Governor Dursun Ali Şahin, whose comments about the Edirne Synagogue being used solely as a museum after its restoration due to Israeli raids on al-Aqsa in Jerusalem received serious criticism, is facing an administrative investigation for his comments, according to sources in Ankara.

Şahin had said, "While those people akin to bandits massacre Muslims within al-Aqsa, we are restoring their synagogues over here. I am voicing this with hostility inside. The synagogue here will serve solely as a museum once the restoration is complete."

The Edirne Synagogue, built with the permission of the Ottoman government, started to serve the Jewish community of Edirne in 1907. It served as a synagogue until 1983 when the Jewish community disappeared. The building was transferred to the Foundations Department in 1995. The roof of the building collapsed in 1997. The restoration project, which will be complete in the next few months, cost the department close to TL 4.5 million ($2.07 million).

After serious criticism, Şahin backtracked on his comments, arguing that the decision to turn the building into a museum belonged to the Foundations Department. In a statement released by the Governor's Office, reports pertaining to the synagogue being turned into a museum by the governor because of the developments in Israel were dismissed as false. The office said the governor's statement was made to voice his disapproval over the developments in the al-Aqsa compound.

The Turkish Jewish Community and the Office of the Chief Rabbi, in a statement said: "Developments in the Middle East do not give anyone the right to turn Turkish Jews, who are proud to be a part of the Ottoman and Turkish nation, into targets. We are concerned over such a statement voiced by a governor who represents the state."

In the statement, it was noted that the restoration of the synagogue was graciously done by the Foundations Department with the support and cooperation of the Jewish community and that the building would serve a dual purpose as both a synagogue and a museum.

Foundations Department General Manager Adnan Ertem also released a statement, underlining the fact that the building would serve as a place of worship. He said the principle function of the building would be to serve as a synagogue. "The secondary purpose is its cultural value. It will serve both as a place of worship and a museum, just like the Sultanahmet Mosque or the Süleymaniye Mosque," he said.