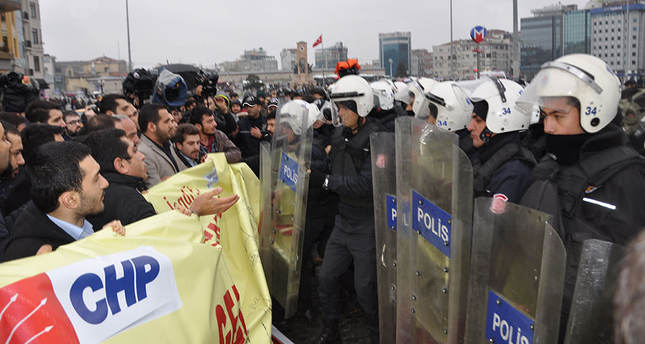 by daily sabah
Nov 23, 2014 12:00 am
A group of Republican People's Party (CHP) members from the party's youth branch staged a protest on Sunday in Taksim's renowned Gezi Park - which was the scene of violent riots in 2013. The police were forced to intervene as tensions escalated.

A group of 50 people from CHP's youth branch gathered in front of Marmara Hotel located in Taksim and were confronted by police. The protesters, who aimed to make a press statement in Gezi Park, were not permitted to do so. Continuing to shout slogans in front of the hotel, the group headed to Gezi Park despite the warnings of the police.

When the group insisted on carrying out the process the police fired pepper gas to disperse the crowd.

The group gathered again in Taksim square and finally made a press statement, before leaving Taksim.