Activists take to streets to protest violence against women 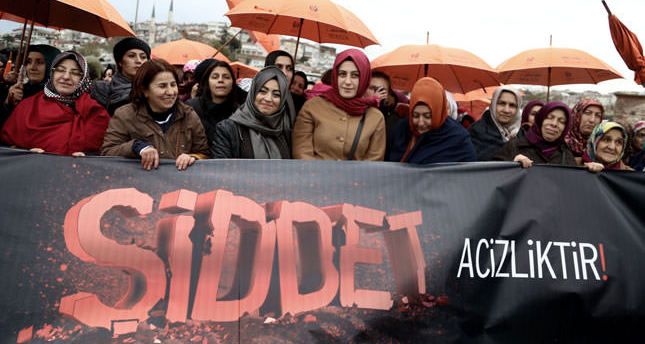 The International Day For The Elimination of Violence Against Women was marked in Turkey by activists rallying to denounce the violence, which has reportedly claimed 240 lives in 2014 so far

Activists across Turkey took to the streets yesterday to mark the International Day for the Elimination of Violence Against Women and raise awareness about the disturbing rise in domestic violence cases.

According to statistics released by women's rights NGOs, 240 women have been murdered by their spouses since January 2014 in Turkey, though the number is disputed. A broader media coverage of the murder of women has brought the issue into the spotlight recently.

Marking the day by marching on the streets, women condemned the violence and urged authorities to step up measures to prevent domestic violence ranging from verbal insults to homicide.

Lethal domestic violence is a common occurence in the country with victims, often women, seeking divorce. Although police protection and shelters are available for women threatened by their spouses, authorities say it is difficult to prevent murders or acts of violence simply by laws. Family and Social Policies Minister Ayşenur İslam has earlier stated that a change of mindset was required to end domestic violence. In Turkey, a patriarchal mindset is prevalent with women viewed as staining the husband's honor, especially if they seek remarriage after a divorce.

Fatma Elalmış, a secretary in the southern Turkish city of Adana, became a horrifying symbol of violence against women. Speaking to Anadolu Agency on the occasion of International Day For The Elimination of Violence Against Women, 34-year-old Elalmış related her story. As she was going to work one morning, the husband she had previously divorced confronted her and emptied a jar filled with an acidic chemical mixture on the young woman. "It has been nine months since my divorce. One day, while I was walking on the street to go to work, I felt someone was chasing me. I turned back and saw him running towards me. He had a jar in his hand. It was filled and I thought it was gasoline. I thought he would pour it on me and burn me alight. I had pepper gas in my bag. I sprayed it and hit his hand but he did not let go the jar. I shouted and asked for help from passersby but nobody cared. He then threw that thing in the jar on me. I covered my eyes with my hands. When he poured (acid), my clothes fell off. I felt I was burning and in great pain," she says.

Elalmış was hospitalized while her husband was caught by police. She remained in intensive care for months. "I asked doctors to euthanize me because I was in great pain and they encouraged me to endure. 'Think of your children,' they told me. So, I did not give up. I wouldn't be alive if it wasn't for my children," Elalmış says.

Though concrete figures regarding domestic violence are unavailable, a 2012 report by the U.N. Entity for Gender Equality and the Empowerment of Women shows 39.3 percent of women in Turkey experience physical violence while 15.3 percent are abused sexually by their intimate partners in their lifetime.

Turkey is one of the signatory countries of the Istanbul Convention, the first comprehensive and legally binding international document on domestic violence. The convention that came into force in August, required implementation of several steps to combat the violence.

Amid the obligations the convention demands of countries is the penalizing of psychological violence towards women and female genital mutilation, and acting as an accomplice for perpetrators of violence. The convention also orders countries to begin campaigns to raise awareness for gender equality, such as educating students on the issue. Signatory countries will also be required to implement effective laws against domestic violence, and protect the victims as well as offering them therapy.