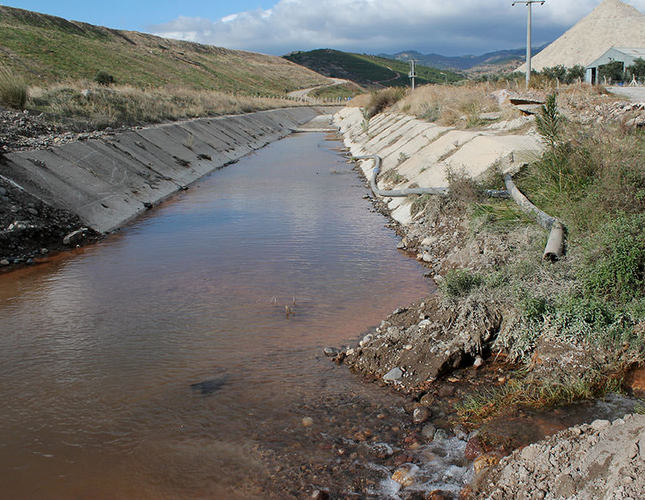 by daily sabah
Nov 26, 2014 12:00 am
Five-hundred tons of cyanide-containing waste from the highly disputed Ovacık gold mine was discharged into a small stream in the Bergama district in the western Turkish province of İzmir. The mine is operated by Koza İpek Holding, one of the largest conglomerates in Turkey and run by Akın İpek, a businessman who acquired the mine in 2005 and known for his close ties with the controversial Gülen Movement.

According to an article in the Turkish daily Sabah, the pipe leading to the waste dam of the mine exploded on Nov. 21 and waste mud was discharged into a small stream near the village of Narlıca. A former mine employee notified the Bergama Municipality about the incident and it was claimed that the mining company covered the polluted area with soil and discharged clean water into the stream.

A spokesman for the Bergama Environment Platform, Erol Engel, said that all shifts from the mine were called on duty after the explosion and that workers toiled all night in order to cover the polluted area. He said that the company made an announcement only after the incident was covered by the press.

The Ovacık gold mine has been a highly disputed project since it was first initiated in 1997. Local villagers, backed by various environmental groups throughout Turkey, gained a reputation after their resistance to the mine and gold production with cyanide. The mine, located just 15 kilometers west of the history- and agriculture-rich Bergama district – the Pergamon of ancient Greeks and Romans – was built against the will of locals in a series of lawsuits for and against the mine, despite a number of appeal processes and clashes with gendarmerie units. The villagers finally took their case to the European Court of Human Rights (ECtHR), which found Turkey liable numerous times to pay millions of liras to villagers. The latest ECtHR decision came in 2010, ordering Turkey to pay 1.8 million liras ($808,000) for not obeying its own Council of State decision against gold extraction with cyanide.

Aside from the mine, Akın İpek owns the Bugün daily and Kanaltürk TV. Bugün daily is known for its Gülenist propaganda and critical coverage of the government.