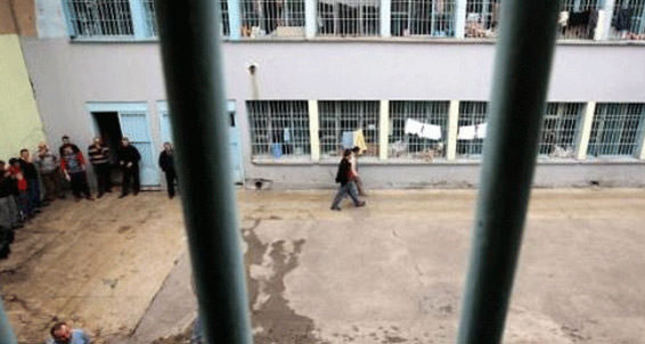 by Daily Sabah Nov 27, 2014 12:00 am
Prisons in Turkey, largely emptied after a nationwide pardon in the year 2000, are now nearing capacity with only 3,000 vacancies available according to the latest figures.

The total capacity of prisons in the country is currently 159,475 and they will likely work over capacity as their occupancy rates have tripled since the infamous "Rahşan pardon," named after Rahşan Ecevit, wife of the late Prime Minister Bülent Ecevit. Bülent Ecevit, then deputy president of the ruling Democratic Left Party (DSP), pressed for the amnesty law that originally aimed to pardon the minors behind bars, but later expanded into a general pardon by the Parliament. The pardon led to a release of convicted murderers, sex offenders, robbers and others committed for felonies.

In 2000, the number of convicts in prisons dropped to as low as 49,000 while the prison capacity was about 70,000 at the time. New prisons were built to meet the rising demand, but only 3,000 vacancies are currently available in prisons.

Announcing the latest figures at a Parliamentary meeting on Wednesday, Turkish Grand National Assembly's Human Rights Committee Chairman Ayhan Sefer Üstün, said prisons housed more than 148,000 men, more than 5,000 women and 2,053 minors. He said that surpassing the capacity was currently out of the question, but there could be problems regarding the distribution of convicts to the prisons with some remaining relatively less crowded while others struggling with a large number of convicts.

Overcrowded prisons became a thing of the past in the early 2000s following both the amnesty law and a new penal code facilitating releases pending trial. The implementation of a new regulation enabling the suspension of prison sentences further contributed to the release of people convicted of petty crimes. The subsequent reforms on release with judicial review and the uproar against sentences for crimes related to freedom of expression also helped facilitate the decline in Turkey's prison population.


Statistics published following the implementation of the amnesty law has shown that one in every five convicts was back in prison within two years for either the same offense he or she served time or another offense.

According to figures between 2000 and 2014, the number of prisoners peaked this year, rising from 144,178 in 2013. Embattled with the rising figures, the Justice Ministry is constantly building new prisons. Currently, there are 365 correctional facilities in the country.