Istanbul to Ankara will take 1.5 hours by train, minister says 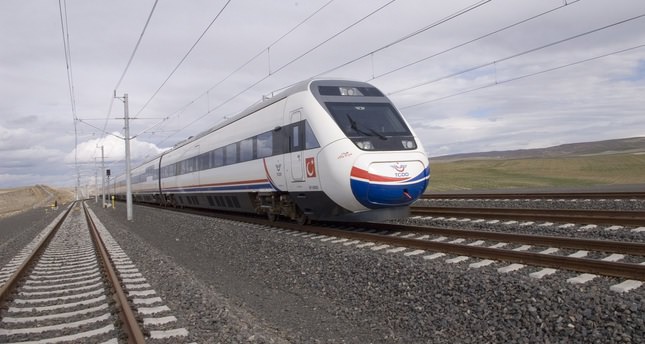 by daily sabah Nov 27, 2014 12:00 am
Minister of Transport, Maritime and Communication, Lütfi Elvan, has announced that the government is currently working on a new high-speed railway project that will connect Istanbul and Ankara. Once the plan is put in place the passengers will be able to travel between the two destinations in one and a half hour.

Elvan has elaborated on the project saying the trains that will travel between Istanbul and Ankara in both directions will have a speed of 350 km/h. He said the train route into Istanbul will be via the third bridge, which is currently under construction.

"We think the line which will have the capacity to carry 50,000,000 passengers in a year will be preferable to airways." Elvan said.

He also added: "We prepared the brochure, we could go out to tender once there is interest in the project. We consider the project to be a build-operate model with an investment of $4.5 billion."

If the project runs, it will reduce the current traveling time via high speed train link between Ankara and Istanbul by two hours.

Trains currently run at 250 kilometers per hour (150 miles per hour) along the 511 kilometer (317 mile) line, with the journey time slashed to 3.5 hours from the previous time of more than six hours by bus or car.

The government hopes to reduce the journey duration even more with the upcoming project.