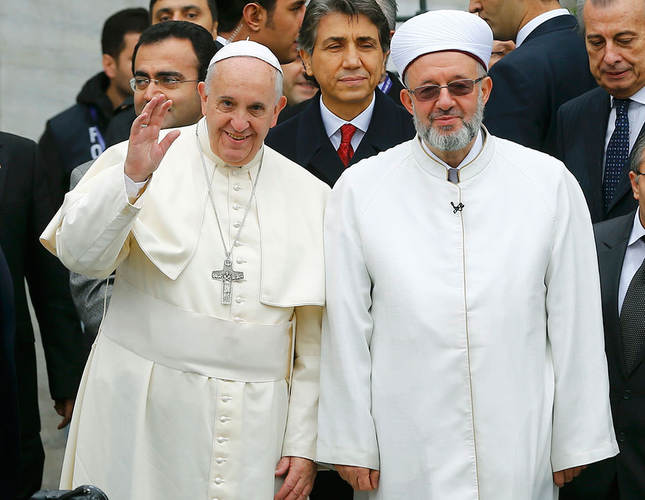 by Associated Press Nov 29, 2014 12:00 am
His head bowed and hands clasped in front of him, Pope Francis on Saturday stood in two minutes of silent prayer facing east inside one of Istanbul's most important religious sites, as he shifted gears toward more religious affairs on the second leg of his three-day visit to the mainly Muslim nation.

Following in the footsteps of Pope Benedict XVI who visited Turkey in 2006, Francis prayed alongside the Grand Mufti of Istanbul, Rahmi Yaran, who had his palms turned toward the sky in a Muslim prayer, inside the 17th-century Sultan Ahmet mosque.

"May God accept it," Yaran told the pope, at the end of the prayer that aims to shows respect for Islam and encourage stronger ties between the two faiths. 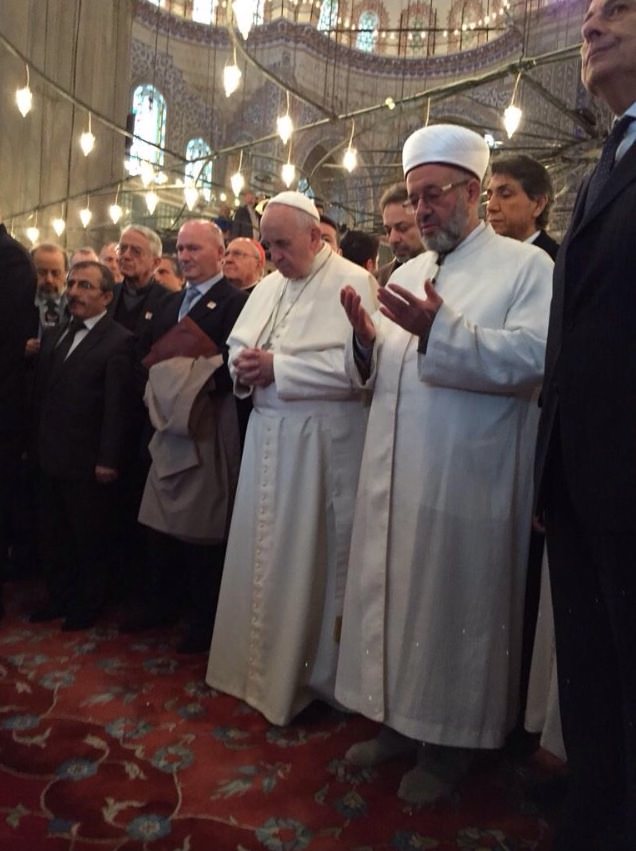 The Vatican spokesman, Rev. Federico Lombardi called it a moment of silent "adoration."

Lombardi, who was behind the pope said Francis told the Mufti two times that we "adore" God and not just praise and glorify him.

Earlier, Francis nodded, smiled and looked up in awe as Yaran gave him a tour of the mosque which is famed for its elaborate blue tiles and cascading domes and better known as the Blue Mosque.

Benedict had visited Turkey amid heightened Christian-Muslim tensions and prayed at the mosque in a gesture that was appreciated by many Turks. The Vatican added the stop at the Blue Mosque at the last minute to show Benedict's respect for Muslims.

Francis then visited the nearby Hagia Sofia, which was the main Byzantine church in Constantinople present-day Istanbul before being turned into a mosque following the Ottoman conquest of the city in 1453. The Hagia Sophia is now museum, although some groups in Turkey want it to be converted back into a mosque.

Pope Paul VI, who made the first-ever papal visit to Turkey in 1967, fell to his knees in prayer inside Hagia Sophia, triggering protests by Turks who claimed Paul had violated the secular nature of the domed complex. All eyes were turned on Francis to see if he would do the same but careful of Turkish sensitivities, the pope avoided praying inside the Hagia Sophia.

Halfway through his tour, the Muslim call for prayer from the Blue Mosque echoed off the Hagia Sophia's marble walls, drowning the voice of the museum's director who escorted Francis around the structure.

A few dozen well-wishers outside Haghia Sophia waved a combination of the Turkish and the flag of the Holy See. One carried a banner that read: "You are Peter."

Francis nearly tripped over while walking the carpet from his plane to a VIP terminal at Istanbul's Atatürk Airport. The governor of Istanbul and Patriarch Bartholomew I, the spiritual leader of Orthodox Christians, helped the pontiff as he tottered.

Meeting with Turkish leaders in the capital Ankara a day earlier, Francis urged Muslim leaders to condemn the "barbaric violence" being committed in Islam's name against religious minorities in Iraq and Syria. He reaffirmed that military force was justified to halt the Islamic State group's advance, and called for greater dialogue among Christians, Muslims and people of all faiths to end fundamentalism.

Later on Saturday, Francis will meet with Bartholomew the real reason for his visit to Turkey.

The two major branches of Christianity represented by Bartholomew and Francis split in 1054 over differences on the power of the papacy. The two spiritual heads will participate in an ecumenical liturgy and sign a joint declaration in the ongoing attempt to reunite the churches.