CHP under fire as municipality cuts down over 150 trees 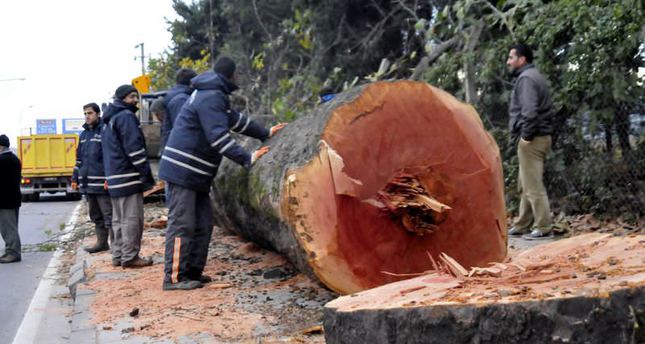 by Daily Sabah Dec 01, 2014 12:00 am
The Municipality of Yalova, a province near Istanbul, has become the subject of a heated debate over its decision to cut down more than 150 trees to make way for an overpass.

Governed by Mayor Vefa Salman from the main opposition Republican People's Party (CHP), the municipality began cutting down trees in the city center on November 27, despite fierce criticism and opposition from locals, environmental organizations and CHP lawmakers.

Long branding itself as a party opposing the "massacre of trees for the sake of development," the CHP has apparently cut off the branch it sits on this time. The opposition party, which threw support for the 2013 Gezi Park protests against the redevelopment of the famous park in Istanbul, now confronts a barrage of protests by environmental activists.

Yalova Platform, a local nongovernmental organization, was at the forefront of the struggle against the municipality's decision to cut down the trees. However, their struggles were ineffective, as workers cut down the trees in a couple of days. Arif Ekin, head of the platform, said 180 trees including 40 plane trees were cut down. "Those included trees that were more than 50-years-old and others that were 20-years-old," he said.

Ekin disputes the municipality's claim that the location of the trees made it impossible to remove and replant them. He said that the municipality could have done it by slightly moving them with a crane and "digging up the soil around the trees."

Hayrettin Karaca, a nationally renowned environmental activist and a Yalova resident, also raised his voice against the cutting of trees.

Nicknamed "Grandfather Earth" for his advanced age and ceaseless struggle for the preservation of green spaces, Karaca told the media that he would "change the course of the road instead of chopping down the trees." Karaca said he was aware of the project and Salman told him only a few trees would be cut. "I did not know it would be this many," Karaca said. "It is wrong to cut off these monumental trees. It was possible to remove and replant them somewhere else," he added.

Salman told reporters before leaving for a trip abroad that the "technology to replant the trees is unavailable, [so] we didn't have any other options." Issuing a statement, the municipality said the trees that were cut down would be chopped up and delivered to the poor families to be used firewood.

Salman, who took office after a hotly contested race with a Justice and Development Party (AK Party) candidate in the local elections, has criticized his predecessor for "massacring" a poplar tree near Yürüyen Köşk, a historical mansion that served as a home to the CHP's first president and Republic of Turkey's founder, Mustafa Kemal Atatürk.

Muharrem İnce, a CHP lawmaker for Yalova and close friend of Salman, issued a message of apology from his Twitter account. "I am terribly sorry that Yalova is remembered for chopping down trees. I apologize to Yalova residents, Turkey and humanity," tweeted Yalova, adding that 1,800 plane trees would be planted in the city in compensation, apparently in response to a pledge by the ruling AK Party's local branches to plant 2,023 trees in Yalova.

Melda Onur, another CHP lawmaker, said the CHP could not defend "neither Gezi Park nor the Yalova municipality. How are we going to defend this massacre?" she said, adding that they could not criticize the government while ignoring their own municipality.

CHP chairman Kemal Kılıçdaroğlu said yesterday that his party opposed the cutting of trees. "We believe nature has its own rights. It is wrong to damage nature and we are known for our sensitivity on these issues," he said. Although he shied away from issuing an outright apology, Kılıçdaroğlu thanked Prime Minister Ahmet Davutoğlu for expressing his sadness over cutting down the trees in Yalova. Davutoğlu, meanwhile, lashed out at Kılıçdaroğlu and CHP.

He noted that the "outcry" over replanting the trees in Gezi Park led to widespread vandalism all across Turkey. "What happened in Yalova? Who cut down those century-old plane trees? It is the same CHP that led the riots for trees that were not cut down in the Gezi Park but relocated to another area," Davutoğlu said.