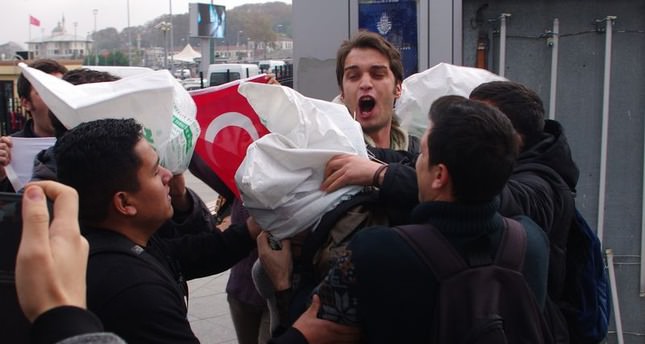 The Istanbul Chief Public Prosecutor Office announced on Wednesday that a group of 13 assailants were indicted for attacking two U.S. sailors in November.

Twelve of the suspects, who are all members of the fringe group All Youth Union were initially charged with "insult," "inflicting injury" and "violation of the protest and rally law."

These charges were made after a video appeared on the Internet on Nov. 12, showing the men assault two U.S. sailors by grabbing them and pulling sacks over their heads.

All 12 were taken into custody and released the following day as the investigation continued. Later on, the investigators found that another man was also involved in the attack.

The five-page indictment charges the 13 men with "insult," "deliberate injury," "property damage" and "violation of the protest and rally law," demanding sentences ranging from one year and eight months to 10 years and six months in prison.

Prepared by Adem Meral, a prosecutor with the Terrorism and Organized Crime Bureau, the indictment also includes the testimonies of the sailors who filed a complaint with the police following the incident.

The indictment was submitted to a criminal court in Istanbul, which must accept or reject it within 15 days.

The U.S. sailors, identified as Marc A. and Henry F., were assigned to the U.S. Navy's destroyer USS Ross, which was anchored in Istanbul as part of a planned visit.

They were on shore leave and visiting the city out of uniform when they were attacked and then chased amid chants of "Yankees go home."


The attack drew condemnation from both the U.S. and Turkey.

"We condemn this disrespectful act, which is in no way tolerable," Foreign Ministry spokesman Tanju Bilgiç said.

The All Youth Union, which describes itself as the Turkish Youth Union even though it is not authorized to use "Turkish" in its title, was one of the main provocateurs during the Gezi Park protests in the summer of 2013 that started off as a peaceful protest by environmental activists and evolved into violent riots.

The fringe group, founded in 2006 by a group of university students, is an affiliate of the Labor Party (İP) that evolved into an ultranationalist political movement from a far left party.

Putting sacks over the U.S. soldiers' heads is viewed as "vengeance" for the infamous "hood event" in Iraq. In 2003, a group of Turkish troops operating in Sulaymaniyah in northern Iraq as part of a special forces team was detained by U.S. troops raiding their safe house, allegedly acting on a tip-off that Turkmens in the safe house were planning to carry out an assassination of a local Iraqi politician. The U.S. troops put hoods over the captured military personnel, including a major. The incident caused public outrage in Turkey and the soldiers were released after 60 hours in captivity.