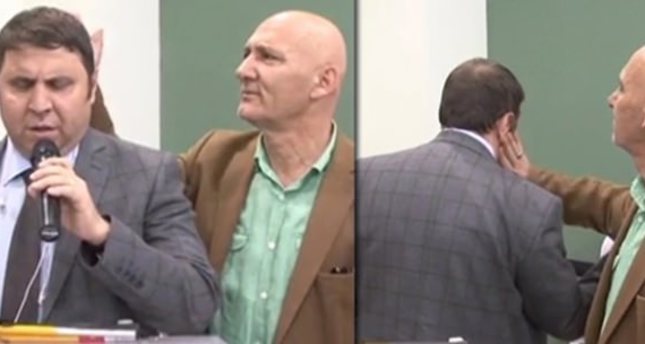 by Daily Sabah Dec 05, 2014 12:00 am
The opposition Republican People's Party (CHP) made headlines on Dec.3, the International Day of Persons with Disabilities, with its members' senseless attitude toward a disabled person.

Altınok Öz, a mayor for the CHP in Kartal, a district on Istanbul's Asian side, drew public outrage when a video showing him slapping a visually impaired man surfaced on Friday.

Öz is seen in the video casually slapping a man speaking on stage for an event on the occasion of the International Day of Persons with Disabilities. As the visually impaired man turned around in reaction, Öz landed a softer slap on his cheek. The mayor then kissed the man on the cheek before leaving the stage. This bewildering act left viewers stunned at how Öz could treat a blind man this way. It was later revealed that the man who was slapped by the mayor was Özgür Uğur, an official at Kartal Municipality's Social Affairs Department. In a statement, Uğur said they had a "relationship" with the mayor "like a father and son" and the slapping was "a greeting ritual among us." The mayor's office also denied the allegations. In a written statement, the mayor's office said Öz was known for his affection for his staff and the incident was just part of a joke and a conventional greeting between the mayor and Uğur.

In a curious coincidence, or rather, a PR disaster for the opposition party, which has been criticized for contradicting its own views on a number of occasions, CHP Chairman Kemal Kılıçdaroğlu made a statement viewed as derogatory for the disabled. Kılıçdaroğlu was fielding questions from his party's supporters during the screening of a documentary about the disabled when he branded President Recep Tayyip Erdoğan as mentally disabled. A disabled man asked Kılıçdaroğlu whether he regards the president as "mentally disabled" for "building a grand palace in a country plagued with problems." Kılıçdaroğlu nodded in agreement and went further. "It would be praising to say he is mentally disabled. It is better that we call him 'out of his mind,' " the opposition leader said.